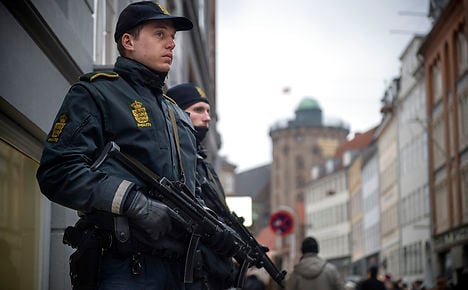 The PM claimed that police "immediately" protected the synagogue when it reality it took them four hours. Photo: Søren Bidstrup/Scanpix
Following last week’s release of a report that criticized parts of the police response to February's deadly twin attacks in Copenhagen, there have been lingering questions about who knew what when.
One of the key points of the report was the revelation that it took almost four hours from the moment gunman Omar El-Hussein shot dead a filmmaker outside the cultural cafe Krudttønden, until police were deployed outside Copenhagen's main synagogue, where a Jewish man was later killed.
See also: Head of Danish security agency PET steps down
In the days immediately following the attack however, Prime Minister Helle Thorning-Schmidt said that police took up positions outside the synagogue “immediately” after the cafe shooting.
On Monday, Thorning-Schmidt said that she hadn’t intentionally misled the public but had herself been misinformed by police.
“I just repeated the observations and the picture we had in the days following the terror attack. Why would I do otherwise?” the PM told TV2 News.
“But the important thing in this case is that a large report has now been made on the entire procedure. There is an acknowledgment of some areas we should learn from – including that one must react sooner at the synagogue. But we should remember that the most important thing is that the police were at the synagogue when the perpetrator was there,” Thorning-Schmidt continued.
See also: Timeline of Copenhagen attacks: terror into the night
The PM would not say whom, or which agency, gave her the incorrect information but just before the release of the police report last Wednesday, the head of the Danish Security and Intelligence Service (PET), Jens Madsen, announced that he would leave his post.
Like Justice Minister Mette Frederiksen, Thorning-Schmidt declined to say whether Madsen’s resignation was directly related to the police report.
Frederiksen however called the four-hour gap between the Krudttønden shooting and police establishing themselves at the synagogue “too long” and “obviously not satisfactory”.
Both Thorning-Schmidt and Frederiksen have been called into a consultation with parliament’s Legal Affairs Committee, the date for which has not been set.