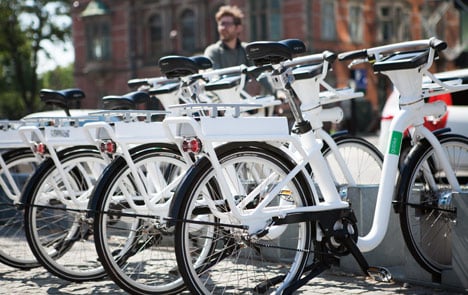 The delivery deadline for the remaining bikes has been extended until October. Photo: GoBike
After receiving less than a fourth of the bicycles promised by provider GoBike, the City of Copenhagen threatened to pull the plug on its pricey bike-share programme if the remaining bikes were not delivered by May 1st.
Although the bikes did not arrive, a city-run fund created to oversee the bike project decided on Monday night to continue its cooperation with GoBike.
A majority of By- og Pendlercykelfonden – a joint operation between the City of Copenhagen, Frederiksberg Municipality and rail provider DSB – approved extending GoBike’s delivery deadline.
The decision now gives the company until mid-October to deliver more than 1,400 promised bicycles, each of which comes with a massive lifetime cost of $10,000 according to consulting firm Copenhagenize thanks to the bikes’ electric motors and built-in tablets with GPS.
Copenhagen Deputy Mayor Morten Kabell, who last month said the city “mustn’t throw money after what has proven to be a questionable provider”, was not pleased with the fund's decision.
“With the fund's decision, we have now lost the opportunity to declare a default on behalf of GoBike. The fund's majority has assumed a massive responsibility given the history of the project and GoBike,” Kabell said in a written statement.
Kabell said he would ensure “that Copenhagen doesn’t pay a single krone” to GoBike if the company fails to live up to the new arrangement.
Rasmus Jarlov, a member of Copenhagen Council for the Conservatives, called the entire bike share project “a farce”.
“This has gone back and forth and residents must really wonder what is going on. I certainly do. I think it is unfortunate that it will continue. I would have rather seen the project stopped because I don’t believe it will ever be a success,” he told Politiken.
GoBike has only delivered 424 of the promised 1,860 high-tech bicycles and usage of the bikes has failed to live up to expectations. Officials behind the project expected that each bicycle would be used three times a day by local commuters. Instead they are used primarily by tourists and each available bicycle has been used less than once a day.