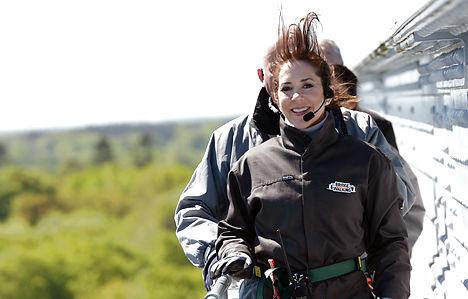 Crown Princess Mary took the first bridge walking tour. Photo: Claus Fisker/Scanpix
When the municipalities of Fredericia Council and Middelfart teamed up to bring the concept of ‘bridge walking’ to Denmark, they pointed to the success of the Sydney Harbour Bridge Climb as their inspiration.
See also: 'Bridge walking' comes to Denmark
Who better then to open Denmark’s new high-flying tourist attraction than the nation’s most famous Australian import, Crown Princess Mary?
Princess Mary took to the Old Little Belt Bridge (Gamle Lillebæltsbro) on Sunday to not only officially open open the attraction, but to take a walk across the 60-metre high bridge herself.
SEE PHOTOS OF MARY BRIDGE WALKING
The conversion of the Old Little Belt Bridge got underway in November, and bridge walking tours are now available.
The one-kilometre bridge walking tour takes about two hours and allows visitors to stand at the top of the old bridge, which was constructed in 1935 and still services cars and trains, and look across at the New Little Belt Bridge, which since its construction in 1970 has been the main connection between Jutland and Funen.
The Sydney Harbour Bridge Climb is one of the most popular tourist attractions in Australia, and officials hope that Bridge Walking Lillebælt can replicate the success in Denmark.
Online tickets for the bridge walking tours cost 249 kroner for adults and 199 kroner for children under 16.
For visitors not as comfortable with heights as Crown Princess Mary, there is a “panic platform” on the tour where one can catch their breath before deciding if they want to go on.
The view from the top. Click through for more photos of Crown Princess Mary's bridge walking tour: