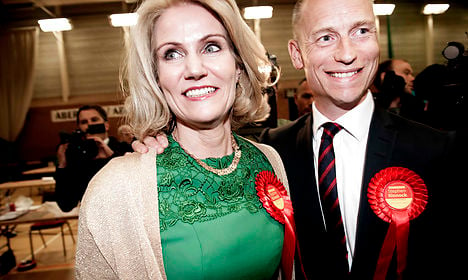 Helle Thorning-Schmidt and Stephen Kinnock watch the vote count come in at Neath Sports Center. Photo: Linda Kastrup/Scanpix
Danish PM Helle Thorning-Schmidt’s husband, Stephen Kinnock, was elected to the UK parliament for the Welsh constituency of Aberavon on Thursday night.
Kinnock, dubbed ‘The Red Prince’ in the British press, won the seat with 49 percent of the vote in a constituency he was largely expected to win due to its strong Labour support.
The 45-year-old Kinnock is the son of former Labour party leader Neil Kinnock. Ahead of the vote count, ‘The Red Prince’ said he should be judged on his own merits and not those of his famous father or wife.
“Don’t vote for me because I’m a Kinnock, don’t vote against me because I’m a Kinnock. Judge me on the basis of what I can bring,” he told the Daily Mail.
“Of course I listen to and speak with my wife and my parents on a regular basis but at the end of the day this election is about electing me – I hope – as the MP for Aberavon,” he added.
See Kinnock and Thorning-Schmidt react to the win here. Story continues below.
Kinnock married Thorning-Schmidt, 48, in 1996. The couple has two teenaged daughters, Johanna and Camilla.
Following her husband’s victory, Thorning-Schmidt said the couple would continue to find a way to make their unusual living situation work.
“We will both be commuting, but we have always done that. I have always been in a situation in which Steve has worked somewhere besides Denmark. Now it is just politics and that just makes it so that we have even more to talk about,” she told the Danish press.
Speaking to the Huffington Post in November, Kinnock conceded that their relationship is “hard sometimes”.
You do live apart for periods of time. I know that her job is quite unusual but I do think there are a lot of people out there who spend time apart, people with increasingly international careers or if you're married to someone in the army,” he said.
"We've been very fortunate that it works for us,” Kinnock added. The Danish PM watched the results come in with her daughter Johanna and her in-laws, former Labour leader Neil Kinnock and his wife Glenys, a former MEP and UK cabinet member. Photo: Linda Kastrup/Scanpix