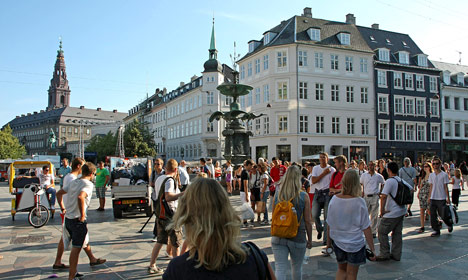 A new global report shows that when it comes to tourism in Denmark, the prices are too high and the priorities too low.
The World Economic Forum’s (WEF) Travel & Tourism Competitiveness Report, released on Wednesday, ranked Denmark as just the 27th best country for tourism, down significantly from its 16th place ranking in the 2011 index.
The WEF report put Denmark near rock bottom in the category of price competitiveness, ranking 135th out of the 141 countries examined.
“Denmark has an extra quality challenge, because our price level is so high. Therefore, the expectations of tourists are also higher. But one must also remember that we have some really good products. Legoland for example is expensive but is making money because the product is good,” Jens Friis Jensen, a tourism researcher at Roskilde University, told Politiken.
Denmark also performed particularly poorly in its prioritization of travel and tourism, coming in at just 91st place.
There were however bright spots. Denmark ranked third overall for its information and communication infrastructure and fourth for its human resources and labour market.
But the overall results put Denmark well behind neighbouring Germany, which was ranked as having the third best tourism industry behind Spain and France.
All four other Nordic countries also topped Denmark in the WEF report. Iceland did best, coming in at number 18, followed by Norway (20), Finland (22) and Sweden (23), which plummeted from fifth place in 2011.
Interactive map from World Economic Forum. Story continues below.
Just last month, the Danish magazine Momentum released a study of European tourism growth between 2004-2014 and concluded that only four countries – Kyrgyzstan, Slovakia, Luxembourg and Cyprus – performed worse than Denmark over that time span.
See also: Danish tourism suffers sluggish growth
Despite the two reports, the Danish tourism industry said things are not as bad as they seem.
Following Momentum’s report, a Wonderful Copenhagen spokeswoman told The Local that the capital has “seen steady growth for many years”.
“City break tourism (short stays in cities for 2-3 nights) is a growing business and is driving growth in tourism in Denmark," Birgitte Arendsdorf Olsen said.
See also: Denmark sees major boom in overnight stays
In March, the hotel and tourist industry association Horesta released a report showing that overnight stays rose by nearly one million between 2008 and 2014, with Denmark’s four largest cities seeing significant increases in the number of stays.
“Generally, Danish tourism is in a positive development. Yes, we had a period that was bad. But that has turned around. If we continue to support the positive tendencies and not panic, we will later come to see the effects of the things being worked on,” Jensen told Politiken on Thursday.