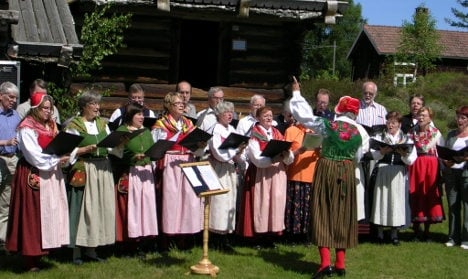 Älvdalan in central Sweden where Elfdalian is spoken. Photo: Elfdalian
It might sound like something from Lord of The Rings or The Local Sweden's recent April Fool's Day prank but Elfdalian is a real language currently used by around 2500 people in central Sweden and is understood to date back to Viking times.
Previously regarded as a Swedish dialect, leading linguistics experts now consider it a separate language and are battling to save it, after figures emerged that less than 60 children can currently speak it.
"Often Norwegians, Danes and Swedes can understand each others' languages and dialects. But Elfdalian can't be understood by any Scandinavians apart from the ones that grow up with it, and that is why we consider it a separate language," Yair Sapir, a linguistics expert who lives in Copenhagen and teaches at Lund University in Sweden, told The Local.
See also: Not even the Danes can understand Danish
The Israel-born professor has dedicated his career to studying the language after initially spending two weeks living in Älvdalan in 2002 and eventually teaching himself Elfdalian.
"The people of Älvdalen are wonderful but they are different to the city folk I am used to. They are in general less educated but more connected to nature and each other than people in urban areas," he explained.
On Thursday and Friday this week Sapir is hosting an international conference on Elfdalian at the University of Copenhagen, designed to raise awareness of the language.
The event comes as the small isolated central Sweden town where it is spoken, Älvdalan, prepares to start teaching it in one preschool from September. Pupils who begin learning it aged six are set to keep it as part of their curriculum until they turn eighteen.
"It's a highly threatened language and so it is great that the municipality is going to experiment with teaching it to children in preschool," said Sapir.
"In the past, children from this area didn't go far beyond the farms they lived on but now they go to school and consume so much other media that it is hard for them to keep Elfdalian as their main language," he added.
"The language was suppressed for centuries by the authorities. They need more books on their language and more recognition and validation of their culture. Hopefully the lessons in preschools will be the start of that."
Sapir admits that Elfdalian sounds like a mystical or other-worldly language but insists its name "isn't supposed to sound Tolkien-like" and has nothing to do with elves. It translates as 'river valley' in Swedish.
"It was just a word designed to sound more English than Älvdalian to help with international recognition and writing about the language."
Through studying Elfdalian experts have also increased their understanding of the Viking language Old Norse, with which it shares some words, features and expressions.
"Elfdalian is a goldmine. It works almost like a linguistic deep freeze, where one can get a glimpse of Old Norse traits that have long since vanished in the other Nordic languages," language historian Bjarne Simmelkjær Sandsgaard Hansen, co-organizer of the University of Copenhagen conference told Politiken.
"It has preserved many old features, which we may not even know existed if we didn't have Elfdalian," he added.