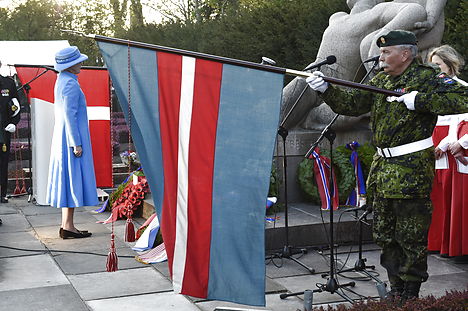 Queen Margrethe pays her respects to the fallen as Denmark marked the 70th anniversary of its liberation on Monday. Photo: Søren Bidstrup/Scanpix
With 2015 marking 70 years since Denmark’s liberation, this year there is plenty more on tap than the annual lighting of candles.
See our photo gallery from 1945
The Danish government has used the occasion to distribute “extraordinary tokens of respect” in the form of 10,000 untaxed kroner to Danish “resistance fighters, concentration camp prisoners, sailors and their widows”.
According to the employment minister, some 1,700 Danes will receive the payment.
“Many of these people will not experience more anniversary years and we owe it to them and their widows to appreciate what they did,” Henrik Dam Kristensen told Berlingske.
The one-time 10,000 kroner payment is in addition to the annual honoraria the same individuals get every year.
In Copenhagen, city officials have budgeted 233,000 kroner toward celebrating the 70-year anniversary.
The annual procession that goes through Vesterbro each May 4th has been moved to Copenhagen’s Town Hall Square, where thousands of Danes are expected to gather beginning at 6pm to mark the occasion.
See also: 'The Germans have surrendered'
A group of pilots will also use the anniversary to fly low enough over Copenhagen in historic planes that onlookers can see the American insignia on the underside of the wings.
On May 5th, various locations around Copenhagen will host Street Dinner events in conjunction with similar activities in Amsterdam.
Copenhagen’s deputy mayor for cultural affairs, Carl Christian Ebbesen, said that celebrations of the anniversary were money well spent.
“I think that many young people take freedom and democracy for granted and therefore it is important to emphasize that it was just 70 years ago that we were seized by a tyrant and the spectre of war consumed us. It is important to note that democracy and freedom are worth fighting for,” Ebbesen told Berlingske.
Outside of the capital in the small Zealand village of Nyvang, some 200 actors from Denmark, Germany, Sweden and the Netherlands marked the 70th anniversary by staging a large-scale role playing performance in which they recreated the German seize.
“This shows how brutal that time was. You can only show that with this kind of arrangement. Pictures or books don’t do. One must experience,” actor Michael Bremer told public broadcaster DR. See video of the role-playing below, in Danish and German with Danish subtitles.