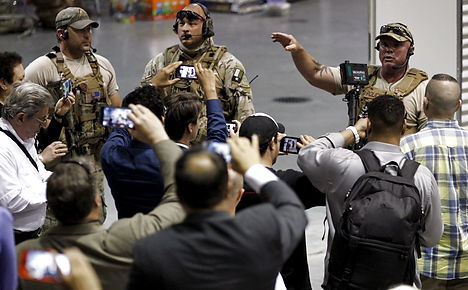 Two gunman who opened fire on Sunday at the anti-Islam art exhibit featuring depictions of the Prophet Mohammad were themselves shot dead at the scene. Photo: REUTERS/Mike Stone/Scanpix
After two gunmen opened fire on a 'draw the prophet Mohammad' contest in suburban Dallas on Sunday, Jyllands-Posten's Flemming Rose said the attack will likely have little effect on American discourse.
"The lines have already been drawn in this debate in the US and I do not think events like these can change anything, because people will read their own opinions into it," Flemming Rose told Jyllands-Posten, where he is
currently the foreign editor.
"Those who think you have a right to draw Mohammed if you want, and believe it is an important part of freedom of speech will say: 'There, you can see that freedom of speech is under threat'."
"The other wing will say that it is an unnecessary provocation," he added.
Jyllands-Posten sparked lethal protests in some Muslim countries after its 2005 publication of 12 cartoons that included a picture of the Islamic prophet wearing a bomb in a turban.
In 2006, the US State Department reacted to the Danish cartoon controversy by saying it supported freedom of expression but that "anti-Muslim images are as unacceptable as anti-Semitic images."
"Americans have a belief that you shouldn't offend people's religious sensitivities," Rose said.
Part of the problem was "the enormous political correctness that leads to absurd situations at [US] universities," he said, referring to warnings put on some educational materials that students could find them upsetting.
"The historical explanation is that the US was founded by religious minorities who felt persecuted in Europe," he added.
Rose still lives under police protection because of death threats made against him.
The decision by the right-leaning Jyllands-Posten to publish the caricatures was controversial in Denmark and many journalists criticized Rose for doing it.
However, in March the 57-year-old was awarded a prize by the country's national press club for "being a strong and central actor in the international debate about freedom of speech."
Url copied to clipboard!