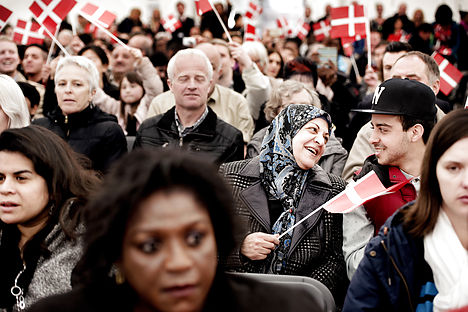 Nearly 3,000 people obtained Danish citizenship in 2014. Photo: Linda Hastrup/Scanpix
Nearly 3,000 new Danes were officially welcomed into the fold at Christiansborg on Sunday.
All 2,967 people who obtained Danish citizenship during the course of 2014 were honoured at the tenth annual Citizenship Day in Denmark’s parliament building.
The citizenship ceremony was attended by upwards of 1,000 Dannebrog-waving guests and representatives from all political parties, including Prime Minister Helle Thorning-Schmidt. PM Helle Thorning-Schmidt poses for photos with new citizens. Photo: Linda Hastrup/Scanpix
MP Özlem Cekic, who herself was born in Turkey, told Ritzau that the annual citizenship celebration is “one of the best days at Christiansborg”.
“People are happy and proud and I think it is very touching. Everyone is dressed festively and celebrating their new citizenship. Now they are a part of Denmark and Denmark is a part of them,” she said.
Under the Danish constitution, foreigners can only obtain citizenship by law. Twice each year – in April and October – parliament is presented a bill with the names of all individuals who have qualified for citizenship, which it passes as a formality.
According to Jyllands-Posten, the most recent bill presented earlier this month contains 3,314 new citizens, which is twice as many as the citizenship bill passed at the end of 2014 and the highest number since Thorning-Schmidt’s government took office in September 2011. Photo: Linda Hastrup/Scanpix
Among the requirements for Danish citizenship is continuous residence in Denmark for a specific amount of time. This can vary from just two years for citizens of Nordic countries to six years for those married to a natural Danish citizen or nine years for foreign nationals without a Danish spouse.
New citizens must also pass a citizenship test. A new, more modern – and some would say much easier – citizenship test was introduced last year that focuses more on current issues and less on obscure Danish history.
Other citizenship requirements include passing Danish language courses, having a clean criminal record and being free of public debts.
Prospective Danes must also pledge their loyalty to Denmark and are currently required to give up the citizenship of their home country. However, in December 2014 parliament passed a law allowing dual citizenship, the culmination of years of lobbying on behalf of expats living in Denmark and Danish citizens living abroad. The dual citizenship law goes into effect on September 1.