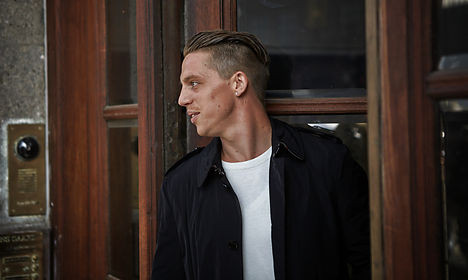 Nielsen at Copenhagen City Court on Thursday. Photo: Michael Bothager/Scanpix
Danish striker Nicki Bille Nielsen, who plays his club football in France for Evian, was handed a 60-day suspended sentence on Thursday for assaulting a police officer.
Public broadcaster DR reported that he had been handed the sentence along with "80 hours of community service by the court in Copenhagen after biting a female police officer on the arm in 2014".
The three judges who ruled on the case were divided on the question of whether the 27-year-old had indeed bitten the police officer after a night out in Copenhagen in April last year.
See also: Danish football star charged with assault
Bille Nielsen was apprehended after kicking a bicycle and a car-park ticket machine. He then resisted arrest before a police officer claimed that he had bitten her on the arm.
However, only two of the judges felt there was enough evidence to prove the bite. Prosecutors had wanted Bille Nielsen to serve a 60-day sentence.
In 2009 he was handed a 40-day sentence for a driving offence, while Danish media report that, while playing in Norway in 2013, he had to pay a fine of 10,000 Norwegian kroner ($1,276) after breaking glasses and spitting on a barman during a fight in a nightclub.
Bille Nielsen has not ruled out appealing against the conviction.