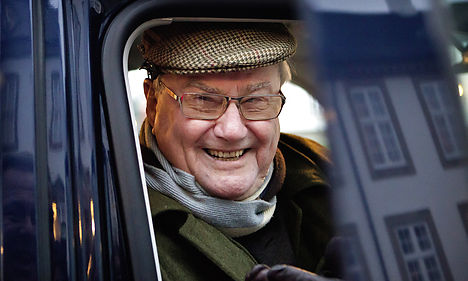 Prince Consort Henrik's actions have led the tabloid press to wonder if he is in "a crisis". Photo: Nils Meilvang/Scanpix
In the days after the entire nation paid tribute to his wife on her 75th birthday, Prince Consort Henrik has been making headlines for all the wrong reasons.
The national press first reported that mere hours after missing Queen Margrethe’s birthday celebrations due to a bout with influenza, Prince Henrik was on his way to Venice. A spokeswoman for the Royal House said the trip was to help Henrik recoup, but the tabloid press presented it as Henrik failing to support his wife on her big day.
“Too ill to celebrate birthday: Now the prince consort has gone on holiday to Venice,” screamed BT’s headline.
This was followed up by interviews with a slew of royal experts about how Prince Henrik had let down his wife.
“The queen has said again and again that it means a lot to her that they are two and that he is by her side. But during the celebrations, she had these experiences alone. The most touching was when she stepped out to on the balcony and stood completely alone,” Annette Kokholm, a commentator on the royals, told BT.
She said that Henrik’s absence gave the impression that the 80-year-old prince consort was seriously ill.
“And then when he suddenly so soon after [Queen Margrethe’s birthday] goes on holiday, the sentiment goes from feeling bad for him to feeling bad for her. It becomes a story about the husband who dropped her,” Kokholm said. Prince Consort Henrik has leased out his wine operation. Photo: Jeppe Michael Jensen/Scanpix
Out of the wine business
While royal watchers were still speculating about the 80-year-old prince consort’s absence at Queen Margrethe’s birthday and his southern holiday, the Royal House announced on Tuesday that after 40 years of producing and selling wine from Château de Cayx, Prince Henrik decided to lease out the operations to the French company Vinovalie.
In a press release, the Royal House said that Vinovalie would continue to produce the wine and that it would continue to bear Prince Henrik’s name. The decision was positioned as “a generational change in which there is not the same need to be directly involved in the production”.
“I am glad about this solution, which means that the production of quality wine at the château can continue and be sold around the world,” Prince Consort Henrik said.
While the royals announced the decision as a well thought out move, the tabloid press unsurprisingly took a different tact, preferring headlines like “In the midst of crisis: Prince Henrik gives up his life’s work” and stories about his “worrying behaviour”.
In February, Prince Consort Henrik also set off a round of unflattering stories after complaining about his official title.
“I have always said that I should be a partner, but I am not considered as a partner because I’m not on the same level as my wife which is completely ununderstandable [sic]. All the queens in the history of the world have made their husbands king consort. Why should I be under my wife?” he said during a press conference with Dutch journalists.