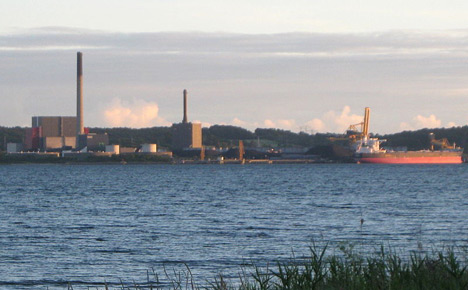 The spill originated at the Ensted Power Station. Photo: Hubertus/WikiCommons
Some 3,000 litres of diesel oil leaked into Aabenraa Fjord off the eastern coast of Jutland on Wednesday.
According to the South Jutland Police, the oil was stored in a tank at the former Ensted Power Station, a thermal power plant that closed down in October 2013. Police said that a broken pipe began spewing the oil into the bay Wednesday morning.
Police said that the spill covered roughly 500-600 square metres in the fjord.
South Jutland Police wrote on Twitter that around 300 square metres of the diesel oil spilled and that both the Danish Emergency Management Agency (Beredskabsstyrelsen) and the Danish Home Guard (Hjemmeværn) had been called in to help contain the spill.