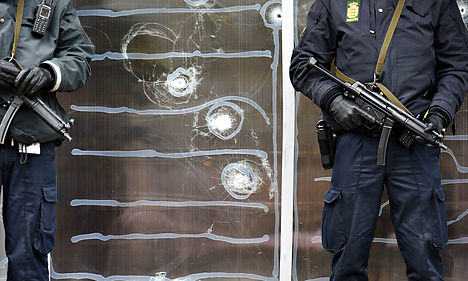 Some of the threatening notes were placed at Krudttønden, the cafe shot up in February. Photo: Søren Bidstrup/Scanpix
Eleven notes have been found in the Copenhagen district of Østerbro warning of a new terror attack, TV2 Lorry reported Friday.
“Denmark will soon be hit by a terror attack that will make what happened on February 14 look like a prank – look forward to it,” the notes read.
Some of the notes were placed at Krudttønden, the cultural cafe in Østerbro where Omar El-Hussein opened fire on a free speech and blasphemy event, killing 55-year-old filmmaker Finn Nørgaard.
El-Hussein later killed security guard Dan Uzan at a Copenhagen synagogue. Several police officers were injured in the shootings before El-Hussein was killed by police.
According to TV2 Lorry, the threatening notes were also placed at a memorial for Nørgaard.
“Some notes have been hung up in Østerbro. I can’t discuss the content, but we are investigating it,” Copenhagen Police spokesman Carsten Reenberg told Ritzau.
TV2 Lorry reported that police have involved the Danish Security and Intelligence Service (PET).
Five men have been arrested for allegedly helping El-Hussein, a 22-year-old Dane of Palestinian origin, obtain and get rid of the weapons he used in the February 14-15 twin attacks. All five had their custody extended last month for an additional four weeks.