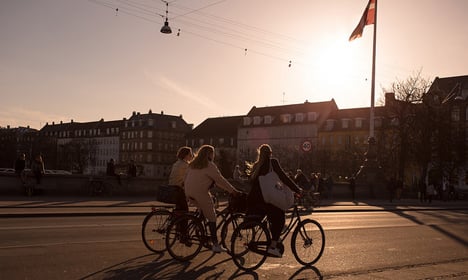 Danes cycled more in 2014 than they had in the last 20 years. Photo: Alex Berger/Flickr
Danes have been world renowned for their cycling for years, but in 2014 they stepped it up a notch.
Statistics from the Danish Road Directorate (Vejdirektoratet) showed that Danes pedalled a total of 3.1 billion kilometres last year. That’s akin to circling the globe some 77,000 times.
Not since 1994 have Danes been such frequent users of what they often refer to as their 'iron horses'.
See also: Danish bike culture even cooler than you thought
Transport Minister Magnus Heunicke attributed the seven percent increase over 2013 to recent governmental efforts to encourage cycling.
“We have invested massively in the area of cycling in recent years and other countries are closing in on us so it would be a shame to be passed,” he told Politiken, which reported that the government has spent 420 million kroner on cycling initiatives.
Despite Danes’ increased cycling, it may already be too late for Heunicke’s wish for Denmark to be seen as the world’s top cycling nation.
According to a March analysis from the Technical University of Denmark and Lund University, the Dutch bike more often and further than Danes. The universities pointed to a 2013 survey in which 63 percent of respondents in the Netherlands said they cycle numerous times each week, compared to 48 percent of respondents in Denmark.
The universities also found that the Dutch cycle an average of 850 kilometres per year, compared to 530 kilometres for Danes.
Even if Denmark can’t lay an outright claim to the title of the world’s cycling leader, the Danish Cyclists’ Federation (Cyklistforbundet) said that Denmark’s investments have clearly paid off.
“It’s terrific that it is working but the efforts need to continue – and preferably be increased,” CEO Klaus Bondam told Politiken.
See also: Copenhagen to pull plug on pricey city bikes
Bondam said that efforts to increase cycling to school and to promote cycling in Denmark’s mid-sized cities were essential.
The Danish Road Directorate stats showed that Danes’ cycling habits have been steadily increasing since 2010, when particularly bad winter weather caused the numbers to fall significantly.