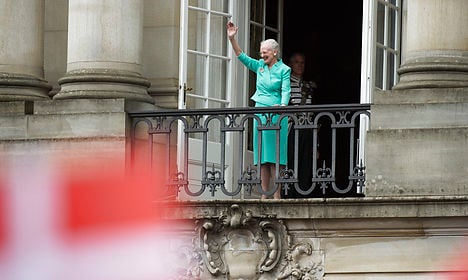 Queen Margrethe waving to the crowd from Amalienborg. Photo: Niels Ahlmann Olesen
Queen Margrethe's birthday began with a family birthday party at 8.30am at Fredensborg Palace in northern Zealand. The Royal Family then went to Amalienborg, where true to tradition they greeted the gathered masses at 12pm. Queen Margrethe, Crown Prince Frederik and Crown Princess Mary were then driven by coach through the streets of Copenhagen.
The Local caught up with the procession on Strøget, where we found a massive crowd vying for their glimpse at the queen.
“It’s a celebration today; it’s a big day for the Danish people,” Vibeke Rasmussen said.
Danish businessman Benny Black told us that when a work meeting brought him to Copenhagen, he simply couldn’t pass up the opportunity to see the queen.
“The queen is really important to the identity of the Danish people – much more important than you might think,” Black said.
“I really think she is in tune with the Danish people and what Danes believe in as their core values,” he added.
With the queen turning 75, some have wondered whether or not it is time for her to step down. A recent opinion poll showed that even though Danes by and large think that her son, Crown Prince Frederik, will make an excellent king, they are not ready for ‘Daisy’ to go.
But when we asked Rasmussen if she thought it was time for a change in the Royal House, she did not hesitate.
“Yes. Today! She is now 75, it’s time to get off the throne,” Rasmussen said.
Black, however, disagreed.
“It’s not a Danish tradition [to step down]. She has said herself that she won’t leave before she dies and I think that is ok,” Black said.
If you weren’t able to see the queen for yourself today, see our short video here: