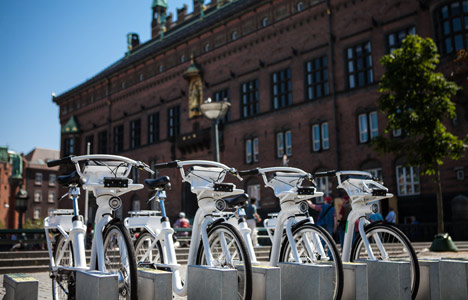 GoBike has two weeks to deliver the rest of the bikes. Photo: GoBike
After receiving less than a fourth of the bicycles promised by provider GoBike, the City of Copenhagen is threatening to pull the plug on its pricey bike-share programme.
GoBike was supposed to have delivered 1,860 new high-tech bicycles, complete with GPS-enabled tablets and electric motors, to Copenhagen for an expansive bike-share programme aimed at commuters and tourists.
But mid-way through the month, just 424 of the bikes have arrived and GoBike has said it cannot provide the remainder. City officials are now resigned to the fact that they will have to kill their prestige project, which was introduced with great fanfare and to massive criticism in 2013.
“We mustn’t throw money after what has proven to be a questionable provider and therefore we are closely our pocketbooks in order to limit the loss,” Copenhagen Deputy Mayor Morten Kabell said in a press release.
The city has officially given GoBike 14 days to deliver the remaining 1,436 bicycles. If they do not arrive, the project will officially be killed.
GoBike CEO Torben Aagaard told broadcaster DR that his team thinks they can deliver on time.
“We are working hard on a solution that can get the city bikes onto Copenhagen streets. We think we can do it,” he said.
The bike share programme carried a total price tag of 88 million kroner over eight years, around 17.5 of which has already been paid to GoBike by the City of Copenhagen, Frederiksberg Municipality and national rail operator DSB.
Usage of the bikes, which cost a massive $10,000 each according to consulting firm Copenhagenize, has been well under expectations since they hit the streets in October. Officials behind the project expected that each bicycle would be used three times a day by local commuters. Instead they were used primarily by tourists and each available bicycle was used less than once a day.