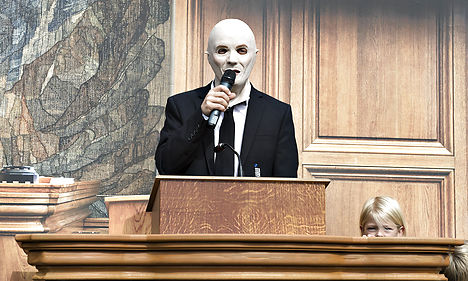 The Puppet Party claims to be close to qualifying for the election. Photo: Henning Bagger/Scanpix
They were launched on April Fool’s Day of 2014, but they insist that they are not a joke.
They wear latex masks and matching suits. They've disrupted parliamentary proceedings by singing opera and once held a punk concert outside of Christiansborg.
Their party vision states that they are against “politicians who lie. Politicians who do nothing other than attack each other. Politicians who speak empty spin. Politicians who are career-fixated, personality-fixated and without vision.”
Meet Denmark’s newest, and perhaps strangest, political party: The Puppet Party (Dukkepartiet).
According to party co-founder Kasper Gevaldig, the party is just 2,000 shy of the 20,260 verified signatures needed to qualify for the 2015 parliamentary elections.
“We have been going for a full year, but we can see that things have really been picking up recently. Last week, we had around 300-400 [signatures] per day,” Gevaldig told broadcaster DR, adding that he hoped the party would pass the magic threshold as early as next week.
That claim was soon thrown into doubt however after DR contacted some of the largest municipalities in Denmark and found that the numbers don’t seem to add up. In Copenhagen, just 155 signatures have been verified and in Odense it was estimated at around 30, leading at least one expert to conclude that the party inflated its numbers to gain attention.
Confronted with the discrepancy, Gevaldig – whose party claims to be based on the premise of removing “politicians who lie” from office – admitted that the signature claim was “a necessary lie”.
“The whole point of wearing masks and pulling off events is to symbolize where politics is at now. And with this lie, we think it is just a continuation of all the other lies we have heard,” he told DR.
While they may have made up their signature totals, the party still insists that its message is real.
“Of course it is crazy to wear a mask and claim to be a puppet. But the question is not how serious one should take the Puppet Party, the question is how serious one should take the other political parties,” a spokesman says in a party video.
The party’s vision lays out a full-frontal attack on what it sees as unqualified and power-hungry politicians. The party vows to “force politicians to change their behaviour” and “rip a hole in the political system”.
Among its proposals is a plan to force MPs to use their four-week summer breaks on internships so that career politicians can “reestablish contact to the labour market and [gain] insight into what it means to have a job”.
The Puppet Party says it will only support a government coalition that will agree to let it assume the prime minister’s office for a five-week stint. The party will then select “a regular citizen” to represent them as PM.
If the party manages to gather the requisite number of signatures, it will join The Alternative as newcomers to the ballot. The National Party is also closing in on the 20,260 signature goal, riding a wave of publicity since star poet Yahya Hassan threw his hat into the political ring. If they also make it, there will be 12 parties to choose from when Danes take to the polls later this year.
Prime Minister Helle Thorning-Schmidt must call an election by September 15.