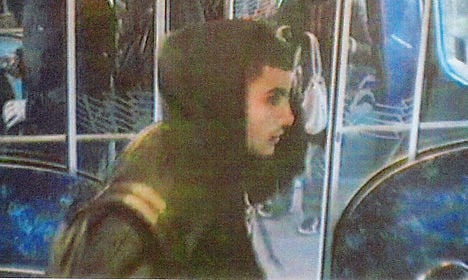 Omar El-Hussein, shown here in a police-released surveillance photo from 2013, expressed "extreme" views in prison. Photo: Politifoto/Scanpix
The gunman who killed two people in twin attacks in Copenhagen in February had once shared a prison cell with an inmate who openly backed the Islamic State (Isis) group, it was reported on Tuesday.
While serving time for a stabbing, Omar El-Hussein was reported three times by prison staff to the Danish Prison and Probation Service (Kriminalforsorgen) for expressing "extreme" views on Islam, TV 2 reported, citing a confidential report by the Director of Public Prosecutions (Rigsadvokaten).
Despite an email warning that the 22-year-old's "extremism is getting worse" he was moved to a Copenhagen prison where he was placed with a cellmate who openly sympathised with Isis.
His fellow inmate was reported last November to prison services and to security intelligence agency PET for "via a profile on Facebook supporting the Islamic State," the report said.
Authorities also suspected El-Hussein wanted to travel to Syria after being released but were unable to get the information confirmed, according to the report.
"It seems like Omar has said that he wants to go to Syria to fight when he is released," prison staff wrote, adding that "the statements are not confirmed."
El-Hussein was shot dead by police on February 15 after killing a Danish filmmaker outside a cultural centre before opening fire at a synagogue, killing a Jewish man.
He had been released early from prison two weeks before the attacks after serving a term for aggravated assault, raising fears he may have become radicalized behind bars.
Prison services flagged El-Hussein up as being at risk of radicalization, but Danish intelligence agency PET said it had "no reason" to believe he was planning attacks.
Five men charged with helping him obtain and get rid of weapons were last month remanded in custody for another four weeks.