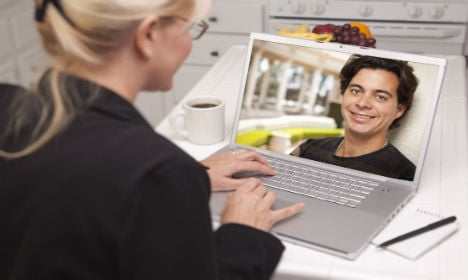 Finding love online may not be as easy as it sounds.

After a number of Danes reported being lured into transferring thousands of Danish kroner to admirers with fake online dating profiles, Danish police wrote a message this week warning online daters of the so-called “romance scams”.

“If it is too good to be true, it is rarely true,” the police warned on Tuesday in a Facebook message titled in all-caps 'AVOID BEING CHEATED, ONLINE DATER'.

“Have a natural scepticism when you’re dating online. The person you are communicating with is not necessarily the person they say they are,” police said.

The police wrote that scammers are often foreigners who send online dating site users messages in broken Danish and English, seemingly with the help of Google Translate.

A con artist may "create a fake profile with a charming photo and flattering profile text", and then propose to those interested that they move communications off of the dating site to email, phone or Skype to avoid detection, police said.

"If they manage to win your trust, a fraudster will use empty promises try to manipulate you to transfer money and then will disappear into thin air," the statement said.

One victim of such a scam, Lis Daugaard, told Danmarks Radio’s programme Kontant on Thursday that she transferred 94,000 kroner ($13,000) to a man she fell for on dating.dk.

Her newly-found love, who called himself Robert Aleksander, charmed her by sending flowers and chocolate and writing love letters, although he never had time to meet her in person, saying he was on business trips. But at some point he asked her to transfer money in order to help him out of a troublesome situation.

She later discovered, however, that his profile had been stolen from an Italian business man, according to DR.

Dating.dk told DR’s Kontant that they regretted Daugaard’s experience and were looking into improving the photo-recognition system in order to catch future cheats.

But discovering that you have become a victim of a romance scam does not only hurt your wallet. It may also be an emotional blow and can actually lead to post-traumatic stress, Monica Whitty, professor in psychology and a specialist in internet dating at Leicester University, told DR.

“People really have a hard time accepting that something was not true. And even when they do accept it, I have still heard people say, ‘I still have their photo on my phone or in my bedroom,’ and new relationships have a hard time competing with that background,” Whitty told DR.

Whitty says there are some 230,000 victims of romance scams in the United Kingdom, according to DR.

To avoid online love scams, the Danish police advised in their message to be sceptical and wary of people who are "unnaturally eager to progress further in dialogue with you on other media – it can be a sign of impure intentions."