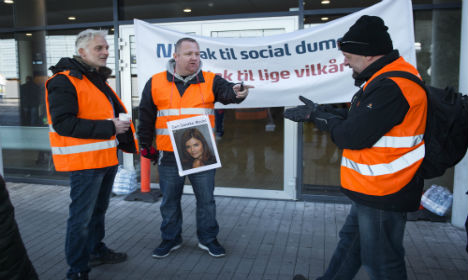 Ryanair got green light from a Copenhagen court on Thursday to file a case against Danish airport employees. Above, a previous demonstration at the airport. Photo: Jens Nørgaard Larsen/Scanpix

On Thursday a Copenhagen court gave Ryanair the go-ahead to pursue a court case with the aim of banning future blockades of its departures.

The court ruled that Ryanair is allowed to file a case against employees at the Copenhagen Kastrup Airport, according to Ritzau.

The employees’ lawyers had hoped to have the case rejected or referred to the Danish Labour Court (Arbejdsretten), according to Ritzau.

There is already, however, a separate Ryanair case running in the labour court in which the Danish Confederation of Trade Unions (LO), the country's largest union centre, is involved.

In the city court, Ryanair wants to get a ban on future blockades of the airline’s departures from Copenhagen by making it illegal.

The development comes after a Ryanair pilot on March 18th called Danish police as demonstrators kept the budget airline's first flight from Copenhagen grounded for three hours amid a dispute with staff unions over wages and working conditions.

"The Ryanair pilot has asked for police to be called to the scene because there was a breach of the safety rules," Copenhagen Airport spokesman Søren Hedegaard told AFP on March 18th.

Between 50 and 60 demonstrators could be seen standing around the aircraft by one of the airport's gates, preventing it from re-fuelling.

Ryanair’s lawyers said in court that the airline “could not live with future demonstrations and physical blockades against its departures in Kastrup,” according to Ritzau. The lawyers also emphasized that the March blockade had constituted a breach of security at the airport.

However, the lawyers of the employees – Ekspeditionsarbejdernes Klub – argued that the case belonged in the labour court.

“This is a totally working rights-related banality, where the labour court has the competency,” said the employees’ lawyer, Nicolai Westergaard, according to Ritzau.

The judge, however, decided that the case did belong to the city court.

According to Ritzau, the Danish Confederation of Trade Unions (LO) wants to get a ruling saying that they have the right to stop Ryanair with a conflict. This could happen through a so-called “sympathy strike.”

LO has distanced itself from the airport protest in March, citing this labour court case to determine whether the Irish airline's flights from Dublin to Copenhagen should be subject to Irish or generous Danish labour law.

It was prompted by the airline's refusal to enter into a collective bargaining agreement with a union for pilots and cabin crew.

The next meeting in the labour court is set for May 12th, but as the case may be dragging on, Ryanair will get some time to get established at the Copehagen Airport, according to Ritzau.