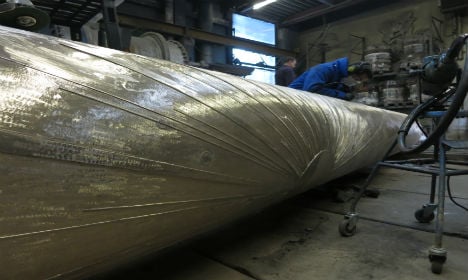 The largest tubular bell in the world, made in Austria, is now installed in Aarhus. It will ring in the lives of the city's newborns. Photo: Aarhus Municipality

In preparation for becoming a European Capital of Culture, Aarhus has installed a three-ton-heavy tubular bell in its harbour, which will be connected to the city’s hospital and ring every time a new baby is born in the city.

New parents at the Aarhus University Hospital can activate an alarm that has been connected to the bell when their baby is born. The sound will be heard in the newly-developed harbour area, medierampen.

The bell is part of the artwork 'Gong' by Danish artist Kirstine Roepstorff. It has been installed inside the new harbour-centre, Dokk1, which will house the new city library of 28,000 square-metres.

The revamping of the city’s harbour area is part of the preparations for Aarhus becoming an EU Capital of Culture in 2017.

“It has been fantastic to experience, being able to make this tone instrument come true. I look forward to hearing the sound and experiencing the vibrations every time a new little Aarhus-life is born,” Roepstorff told the local newspaper, Århus Stiftstidende. The tubular bell is made of bronze and is hollow. It weighs some three tons, is 7.5-metres long and 80 centimetres in diameter. It is therefore considered to be the largest of its kind in the world, according to Aarhus Municipality.

The bell has been specially produced at the foundry Grassmayr in Innsbruck, Austria, which has hundreds of years of experience in producing church bells and other bronze installations. On Wednesday, it was shipped into the port of Aarhus and lifted by a crane into Dokk1 via the roof of the building.

Producing the bell has been quite an experience for Grassmayr.

“The tubular bell for Aarhus has been a special challenge to us because the pipe was to be molded in one piece with 1,175 degrees Celsius fluid bronze in an 8.5-metre high form of clay. At the same time, this is an assignment that means a lot to us as its sound welcomes the new lives in their moments of birth – opposed to all those many bells that in many countries and cultures ring for dead people,” said Grassmayr director, Johannes Grassmayr, to Århus Stiftstidende.

The hospital also expressed happiness about the bell.

“In Denmark we have a tradition for marking the highlights in life," said midwife Joan Dürr, according to the municipality’s press release.

"At the hospital we need to remember that there is also a lot of life, and we are excited about – and thankful for – being part of this new ritual.”

Aarhus has received a number of private and public grants in preparation for its 2017 cultural debut. The Gong is part of the artwork at Dokk1 that in total will cost about 1.9 million Danish kroner, according to the municipality.