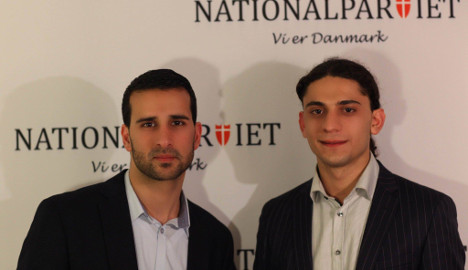 The 19-year-old Hassan has for the past couple of years been an active voice in the Danish political debate, particularly on integration. He has not shied away from controversial statements, upsetting both members of the immigrant community and the cultural elite in Denmark.

The National Party's announcement via Facebook on Tuesday that he will join the group may be seen as another such statement.

The party was founded by three men of Pakistani heritage, sports the Danish flag in its name and has a slogan that says: “We are Denmark.”

In his poems, Hassan is critical of parts of his cultural background and takes issue with his parents as well as the religion of Islam.

But he has also hit hard at what Hassan calls Denmark’s social and cultural elite’s double standards. Referring to the absolute freedom of speech debate, he posted pictures on Facebook of a leading Danish author in a Nazi uniform and also portrayed other public figures in a not-so-favourable light.

Hassan has also compared himself to Copenhagen gunman Omar El-Hussein, 22, saying they were about the same age, were both children of Palestinian immigrants and both had a criminal past involving knife attacks, according to Berlingske Tidende. But as one ended up becoming a poet, the other ended up a terrorist. He said that although he did not agree with El-Hussein, he could in some ways understand him.

Collecting voter signatures
The National Party was founded in November 2014 by Kashif Ahmad and his two brothers, all with Pakistani heritage. Their stated goal is to make it acceptable to be tolerant again. The may be perceived as contrasting The Danish People’s Party, which for many years has been tough on immigration and in many ways has taken a patent on all things Danish.

“We are happy and proud that Yahya has chosen to run for us and I look forward to our continued collaboration. He is a breath of fresh air in the political landscape of Denmark,” Ahmad said in the party statement.

The party wants to run in the upcoming parliamentary election – to be held in Denmark by September 15th at the latest – but needs to collect a little more than 20,000 voter signatures before it earns a place on the ballot. The party says it has received about 15,000 signatures so far, of which 8,500 have been approved, according to Politiken.

The party has received online death threats on Facebook in the past and reported it to the police.

The Danish Refugee Appeals Board, Flygtningenævnet, confirmed in a statement late on Monday that it has changed practice, stating it will now grant take asylum to women and girls from Afghanistan “solely based on their gender”.

The decision was taken by during an extraordinary meeting undertaken by the appeals board.

It cites “ongoing worsening conditions” for women and girls in Afghanistan as the basis for its decision.

Women and girls in the Asian country have seen rights increasingly taken from them since the Taliban took control in 2021. Girls are now no longer allowed to go to school after 5th grade and women have been banned from working for foreign aid organisations. The Taliban has also banned female students from attending universities across the country.

In its decision the Refugee Appeals Board refers to a new report from the EU’s Agency for Asylum. In the report, the EU agency writes  that the “accumulation of various measures introduced by the Taliban, which affect the rights and freedoms of women and girls in Afghanistan, amounts to persecution.”

“Such measures affect their access to healthcare, work, freedom of movement, freedom of expression, girls’ right to education, among others”, it adds.

The Danish agency currently has five ongoing asylum cases with female Afghan nationals. Those persons can “in principle be granted residence” under asylum rules, it says in the statement.

The appeals board will also reopen all cases involving asylum for female applicants from Afghanistan which have been rejected since August 16th 2021, it said. This amounts to around 10 cases according to the statement.

Additionally, the appeals board will assess whether there are grounds to reopen the cases of around 30 male asylum seekers from Afghanistan whose applications were rejected since August 16th 2021.

Afghans whose asylum claims were rejected before August 16th 2021 but who are still in Denmark can apply to have their cases reopened by the appeals board if they believe that the basis for the decision made on their cases has significantly changed based on the most recent background information, the appeals board writes in the statement.

The new Danish practice brings Denmark in line with Sweden in its treatment of Afghan refugees, according to news wire Ritzau.

Martin Lemberg-Pedersen, head of politics and documentation with Amnesty International Denmark, told DR it is “very positive that the Refugee Appeals Board now recognises the brutal persecution Afghan women and girls are subjected to”.

The human rights organisation has documented human rights abuses against women and girls in Afghanistan and had urged Denmark to change its practice.

“Action is being taken too late. But better late than never,” Lemberg-Pedersen said.

“We hope it means that these people’s fundamental rights will be taken seriously from now on,” he said.

The Danish Institute for Human Rights welcomed the decision in comments to DR.

“It is well known that women and girls in Afghanistan are subjected to gross violations of human rights and it has got worse and worse over the last 18 months,” the organisation’s director Louise Holck told DR.

“If it was only up to me to decide, this decision would have been made some time ago,” she said.

“But I think we should be pleased that asylum will from now on be given to women and girls because they are women and girls and for that reason are persecuted in Afghanistan,” she said.

POLITICS
Why case of ‘spy’ sent to Syria is causing headaches for Danish government
Url copied to clipboard!