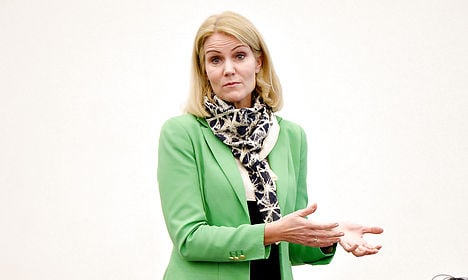 Thorning-Schmidt said she was partially influenced by her teenage daughter. Photo: Claus Fisker/Scanpix
April Fool! As far as we know Denmark has no plans to add English as a second language, although they do speak it rather well.
In a surprise move, the Danish government announced on Wednesday that it would pursue legislation to designate English as an official second language.
Prime Minister Helle Thorning-Schmidt announced the plan by saying “Denmark is part of a globalized world.”
“English is the global lingua franca and we should embrace that rather than run from it,” she said.
“Denmark is already the world’s best country for business and home to the world’s best non-native English speakers, so this will send an important message that we are once again the open and progressive country that the world knows us as,” Thorning-Schmidt said.
Thorning-Schmidt said her decision was influenced by her own teenage daughters, the eldest of whom lives in Wales near Thorning-Schmidt’s British husband Stephen Kinnock.
“She came home to visit recently and just refused to speak Danish. She said ‘Come on Mum, what’s the point? We’re both fluent in English – let’s just drop the Danish. After all, it’s basically incomprehensible’,” Thorning-Schmidt said.
“And you know what? She’s right. So many people in Denmark speak English already so let’s just formalize it,” she added.
The PM said that she thought the move would also send an important signal to non-Danish speakers in Denmark.
“I know a lot of foreigners are upset with my party’s recent tough-on-immigration advertising campaign, so I though I should throw them a bone. Well, some of them anyway,” she said.
Government coalition partners the Social Liberals gave the idea a hesitant thumbs-up, saying they would prefer to also see Arabic added as an official language.
“It seems a bit silly to just add one and I don’t think we should be offending people. Haven’t we done enough of that already? But this is a positive step and I see forward to it,” party spokesperson Jeppe Sørensen said.
The government’s proposal was roundly slammed by the anti-immigration Danish People’s Party (DF), who in February called on Danish universities to stop offering courses in English.
The Local contacted DF to hear more about their resistance to the PM’s plan, but when we told them that we wrote in English they refused to speak with us.
“Jeg nægter simplethen at have mit navn stående med en engelsk citat. Vi bor i Danmark og vi skal tale dansk, for helvede [I refuse to have my name next to a quote in English. We live in Denmark and we should speak Danish, damn it, ed.],” party representative Jørgen Hansen said.
Tim Hammell, the chairman of the expat group Anglos in Denmark, was ecstatic over the PM’s proposal.
“I’ve lived in Copenhagen for ten years now and besides ’tak’ and ‘hej hej’, I haven’t learned any Danish. You don’t even need to. I mean, when is the last time you walked through Vesterbro? You hear more English there than Danish,” he said.
“Now I can get all those people off my back who say I should learn the language of the land. If this passes, I can say that I already speak one of Denmark’s official languages,” he added.
If the PM is able to muster enough support for her plan, English will officially be adopted as Denmark’s second language one year from Wednesday: April 1, 2016.
Did you fall for our April Fool's prank? Let us know in the comment's section below.