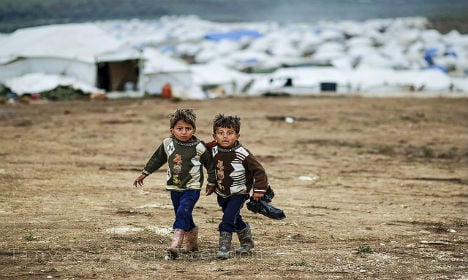 Denmark has donated 250 million Danish kroner for 2015 to the victims of the Syrian conflict. It is estimated that some 18 million people have been affected by the conflict. Photo: SyriaFreedom/Flickr

This is 50 million Danish kroner more than what Denmark granted the Syrian victims in 2014, according to the Danish Ministry of Foreign Affairs.

“It is with a mixture of pride and sadness, that I announce the Danish commitment. Pride because it stresses that Denmark is a humanitarian superpower and bears witness to our solidarity with people living in some of the most miserable conditions in the world. And sadness because it, in spite of the large amount of money, is not enough to cover the extent of the humanitarian needs in Syria,” the Danish Minister for Trade and Development, Mogens Jensen, said.

The ministry calls it a “record-high commitment.” Denmark’s total humanitarian assistance to Syria now stands at over 1 billion Danish kroner since the crisis began. In his speech at the conference, Mogens Jensen calls on other rich countries to also provide support to the around 18 million people in need in Syria and in neighbouring countries. Lebanon and Jordan have the highest number of refugees per capita in the world, according to the ministry.

“I want to send a clear signal to all countries to help lifting this important task,” Jensen says.

According to the BBC, more than 200,000 Syrians have lost their lives in the conflict that in March this year had lasted for four years.

“More than 11 million others have been forced from their homes as forces loyal to President Bashar al-Assad and those opposed to his rule battle each other – as well as jihadist militants from Islamic State,” according to the BBC.