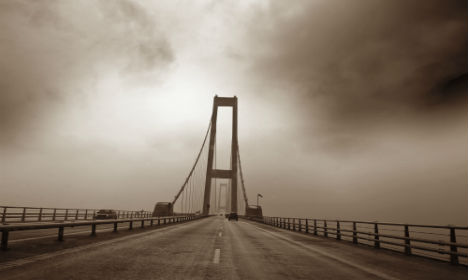 Leading up to a busy Easter traffic-period, the main bridge “Storebæltsbro,” connecting Denmark’s “Zealand” in the West to the island “Funen” and thereby to the mainland of Denmark, was closed on Tuesday, Danmarks Radio (DR) reported.

The bridge was reopened again in the afternoon.

The Great Belt Fixed Link was on Tuesday closed in both directions, according to Danish police.

The Danish Easter holiday has already started for many as schools close this week. The main traffic will start on Wednesday as Thursday and Friday are holidays in Denmark. And a closed “Storebæltsbro” will be disastrous to the flow of the Easter traffic. The bridge is a main traffic junction in Denmark.

At the peak Summer season, there are some 5,500 cars crossing the bridge per hour, according to 2012 sources. Danish media has already started writing stories about how to avoid traffic jams during Easter.

The very same bridge was the focus of nothing less than a royal scandal in early January this year. This time the bridge was also closed due to bad weather but the Danish Crown Prince Frederik passed the bridge in his car without permission. This caused an uproar and led to the crown prince making an apology to the public.