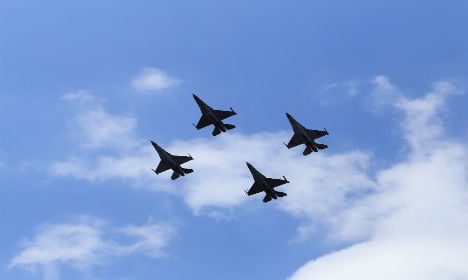 Danish military planes had by February been on some 250 missions as part of the war against the terror group Isis, according to Ritzau. And the bill adds up. Photo: Colourbox

Between October last year and the end of February 2015, Denmark’s costs related to the fight against Isis added up to some 213 million Danish kroner, according to a right to access of documents obtained by Ritzau from the Danish Ministry of Defence.

During the four-month period starting on October 2nd 2014, Danish military planes had been on some 250 missions and had thrown some 200 bombs, according to Ritzau. The total costs of ammunition was 44 million kroner.

April 2nd will mark half a year since the assault against Isis began, according to Ritzau.

Separately, some 110 Danes have travelled to Iraq and Syria to either fight alongside or against Isis, according to Danish Security and Intelligence Service (PET). Per capita, Denmark is the second largest European source after Belgium of jihadist fighters going to the Middle East, though the flow of fighters has slowed.

Adding to the overall war bill

But Denmark has not only been involved in the fight against Isis recently. Denmark has also participated in conflicts in Afghanistan, Iraq and Libya.