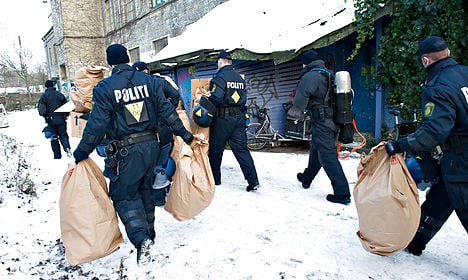 A file photo shows an unrelated police bust in Christiania in January 2013. Photo: Jens Nørgaard Larsen/Scanpix
Another ten men were found guilty by the Copenhagen City Court of participating in the illicit cannabis trade in Christiania and were given prison sentences ranging from one year to 5.5 years.
Friday’s verdict was the fifth in the past week and the sixth overall. In all, 76 people were sentenced to a combined 187 years and three months for selling cannabis in Christiania,  a former hippie commune in the heart of Copenhagen that is now the centre of a billion-kroner drug industry.
Among those sentenced Friday was a 48-year-old biker gang member who goes by the name ‘Badass’. Described in the press as a member of Hells Angels, he was found by the Copenhagen City Court to be the mastermind behind cannabis sales from a specific stall on Pusher Street.
Upon his guilty verdict, the 48-year-old accused the court of delivering a “political ruling”.
“I though that this was supposed to be a politically independent court of law,” he yelled out, according to Politiken.
The prosecutor in Friday’s case expressed satisfaction with the outcome of the Christiania trials, which were the result of a massive March 2014 police raid in which police ransacked 150 locations in Christiania and elsewhere in Copenhagen.
“In the past week we have had some verdicts that are very close to the charges that we pursued so we can only be extremely pleased with the proceedings,” Trine Outzing Sorgenfri told Politiken.
For the earlier verdicts in the Christiania case, see: