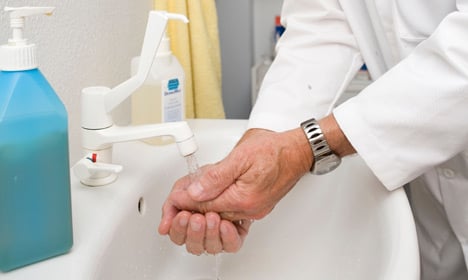 Photo: Colourbox
If two recent studies are to be believed, a large number of Danes are seriously lacking when it comes to basic hygiene.
A study carried out by Copenhagen area hospitals Hvidore Hospital and Rigshospitalet found that just 30 percent of hospital patients washed their hands after using the bathroom.
Even more disconcerting, more than a third of hospital workers – who more than anyone should know the health benefits of good personal hygiene – didn’t wash their hands after visiting the toilet. Only around 65.5 percent of the hospital workers remembered to wash their hands.
“I was really surprised that so many of our health workers don’t wash their hands – but unfortunately I wasn’t surprised that so many of our patients and their visitors forget it,” Torben Mogensen, the medical director at Hvidore Hospital, told public broadcaster DR.
The chairman of the Danish Medical Association (Lægeforeningen) was also shocked by the figures.
“Every single doctor, nurse and other employee knows the importance of good hygiene. That is absolutely not okay. It should be 100 percent – and that is not up for discussion,” Mads Koch told DR.
Apparently handwashing isn’t the only bathroom activity neglected by a large number of Danes.
A Voxmeter poll conducted for the toothpaste company Zendium found that young people in Denmark aren’t very good about remembering to brush their teeth.
Some 58 percent of the 18 to 30-year-olds polled reported that they do not brush their teeth twice a day as recommended. It is particularly before bedtime that they forget about brushing.
Feeling grossed out? Luckily there is some good news.
The hospital project that looked at handwashing found that people were much more likely to wash their hands after a soap dispenser was installed that begins beeping after sensing that a toilet has been flushed.
The beeping continues until the soap dispenser is used, an irritating aural reminder meant to get people to wash up.
“It’s just like driving a car, when there is an alarm about the seat belt – here it is an alarm reminding us to wash our hands,” Mogensen told DR.
And it works. The beeping soap dispenser got handwashing rates up to 70.5 percent for patients and visitors and to 90.7 percent for hospital employees.
Despite the success of the project however, the trial will not be continued and the beeping dispensers will be replaced by signs warning of the dangers of bad hygiene.
Maybe the discontinued beepers can be retrofitted for toothbrushes.