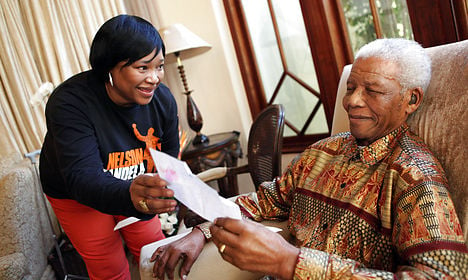 Zindzi Mandela, the youngest daughter of former South African President Nelson Mandela shows him a letter at his home in Johannesburg in 2010. Photo: Nelson Mandela Foundation/Debbie Yazbek/Scanpix
The South African Embassy in Copenhagen confirmed on Monday that Nelson Mandela’s youngest daughter, Zindzi Mandela, will be the nation’s new ambassador to Denmark.
Rumours of Mandela’s appointment first swirled in October but she has yet to make the move to Denmark.
The South African newspaper City Press reported earlier this month that Mandela’s boyfriend, which the paper described as “a tall, handsome Kenyan”, did not want to make the move with her. Mandela has denied those claims.
On Monday, an embassy official confirmed to Berlingske Nyhedsbureau that Mandela is indeed South Africa’s new ambassador to Denmark but did not put a timetable on her arrival.
The City Press reported that Mandela would leave South Africa for Denmark on March 31st, but the embassy did not confirm that report.
The 53-year-old Zindzi Mandela is the youngest of Nelson and Winnie Mandela’s two daughters and was active in South Africa’s anti-apartheid movement.