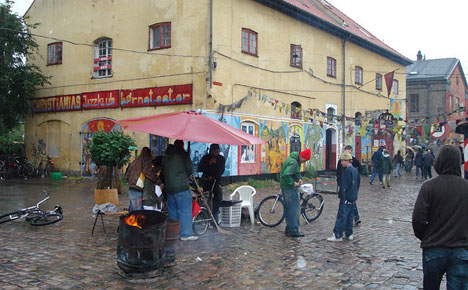 The court case is one of several to come out of a March 2014 at Christiania. Photo: Mbtrama/Flickr
Sixteen guilty verdicts were handed down on Monday in one of Denmark’s largest ever drug cases.
The Copenhagen City Court sentenced the defendants to a combined 49.5 years in prison for their roles in the drug trade in Copenhagen’s notorious Christiania neighbourhood, a former hippie commune that is now the centre of a billion-kroner cannabis industry.
“Cannabis sales in Christiania are organized and we have found all of the defendants guilty in accordance with the indictment,” a statement from presiding judge Kim Gabriel read.
Individual sentences ranged from 15 months to five years in prison.
Monday marked the second batch of guilty verdicts that are the result of a raid on Christiania in March 2014 that led to a total of 80 arrests – the largest bust in the 43-year history of the self-proclaimed 'freetown'.
In January, seven men were found guilty and sentenced to a total of 32.5 years in prison.
Four additional cases are due to be heard in court this week in which 66 men suspected of selling cannabis will face their charges.
The Christiania case has been characterized in the national press as the largest cannabis case in Denmark's history.
According to TV2 News, one of the men found guilty on Monday was Henrik Skov Jensen, a rapper who performs under the name Wood with the group Made For Streets (MFS).