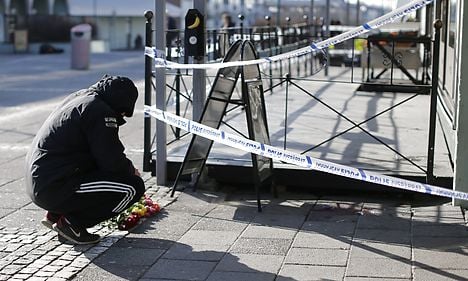 A man lays flowers on the crime scene of a fatal shooting in Gothenburg, Sweden. Two people were killed and several injured when at least one gunman armed with an automatic weapon began firing in a pu
An unnamed 27-year-old Dane was charged with "seriously" violating Sweden's gun laws along with two other men, aged 18 and 20, on Sunday.
The three men are suspected of having connections to a deadly attack at a Gothenburg restaurant on Wednesday.
The trio were arrested 24 hours after at least two masked gunmen armed with machine guns stormed a busy restaurant in Sweden’s second largest city, spraying it with bullets and killing a 20-year-old and a 25-year-old. Several witnesses say a third man filmed the attack.
Early on in the investigation, police said they believed the shooting was gang-related, triggered by an on-going feud.
On Thursday – a day after the shooting – the three men were arrested after police found several arms in the car they were travelling in.  On Sunday, a Gothenburg district court charged the trio on suspicion of “seriously” violating the country’s gun laws. All three have denied the charges. None of them have been charged with suspected involvement in the shooting, however.
“Police are saying that they can’t rule out a link [to the deadly shooting]. And in that sense that’s correct; nothing can really be ruled out,” Peter Gillberg, the lawyer of the youngest suspect, told Swedish news agency TT.
Police would not say what type of weapons were found in the vehicle, but the seriousness of the charges filed by the court indicate that there was either a great amount of, or especially dangerous weapons in the car.
“They had two Kalashnikovs in the car and are extremely interesting [in the case],” an unnamed police source was quoted as telling tabloid Expressen.
Out of the eight people injured in the attack, one is still in a serious “but stable” condition, and five others are receiving treatment for less serious injuries. Two others have been able to leave hospital.