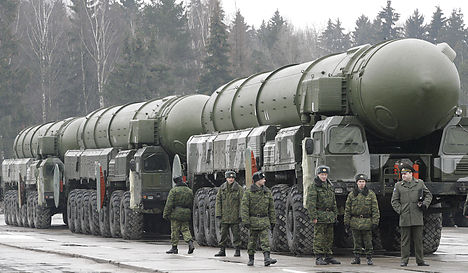 Tensions between Denmark and Russia were ratcheted up a notch on Saturday.

Russia’s ambassador to Denmark, Mikhail Vanin, wrote in an opinion piece published by Jyllands-Posten that Denmark has made itself a target of a potential nuclear attack by joining Nato’s missile defence system.
“I don’t think the Danes fully understand the consequences of what will happen if Denmark joins the American-controlled missile defence. If it happens, Danish war ships will become targets for Russian atomic missiles,” Vanin wrote.
Denmark announced in August that it will will contribute at least one frigate to Nato’s defence system. At the time, Defence Minister Nicolai Wammen said that joining the missile defence system was not a move aimed at Russia.
“That Denmark will join the missile defence system with radar capacity on one or more of our frigates is not an action that is targeted against Russia, but rather to protect us against rogues states, terrorist organisations and others that have the capacity to fire missiles at Europe and the US,” Wammen told Jyllands-Posten in August.
Vanin’s op-ed made it clear that Russia doesn’t share that interpretation.
“Denmark will become a part of the threat against Russia. It will be less peaceful and the relationship with Russia will be harmed. It is of course your decision – I want to simply remind you that it will cost you both money and security,” Vanin wrote.
“At the same time, Russia has missiles that are guaranteed to break through future global missile defence systems,” he continued.
Danish Foreign Minister Martin Lidegaard called Vanin’s statements “unacceptable”.
“Russia knows fully well that Nato’s missile defence is not aimed at them. We are in disagreement with Russia on a number of important things but it is important that the tone between us does not escalate,” Lidegaard told Jyllands-Posten.
The US ambassador to Denmark, Rufus Gifford, also responded to Vanin's remarks.
"We stand with our staunch Nato ally Denmark in condemning the unacceptable statements made by Russia's Ambassador to Denmark. We have made clear that Nato's ballistic missile defence is not directed at any country, but is meant to defend against missile threats," Gifford wrote on Facebook.
On Twitter, he added that "such statements do not inspire confidence or contribute to peace and stability":

US stands w/ DK in condemning statements made by Russia's Amb to DK. Such statements do not inspire confidence or contrib to peace/stability

Denmark’s relationship with Russia has been strained by increased Russian airspace activity over and near Denmark.
In December a Russian military jet nearly collided with a SAS passenger plane out of Copenhagen. An October report from the Danish Defence Intelligence Service (Forsvarets Efterretningstjeneste) revealed that Russia carried out a simulated attack on the island of Bornholm last summer, and in March last year a Swedish SAS pilot said his plane was “just seconds” from crashing into a Russian jet.
Vanin is not exactly a stranger to controversial statements. Following the December near-miss with the SAS, he suggested that Swedish authorities may have imagined the whole thing after smoking too much cannabis.
"The Swedish authorities also recently said there was a submarine in their waters. There wasn’t. Now they say again that they have seen something. I'm afraid the Swedes visit Pusher Street very often," Vanin told Berlingske, referring to the Christiania neighbourhood in Copenhagen known for its cannabis trade.
Prime Minister Helle Thorning-Schmidt said in November that Denmark is not overly concerned about Russian aggression.
“In terms of our territory, we are not worried. We keep our heads calm and the cockpit warm,” she said.
Wammen has also said that Denmark would not hesitate to stand up to Russia telling the Financial Times that “the Russians know we will do what is necessary.”