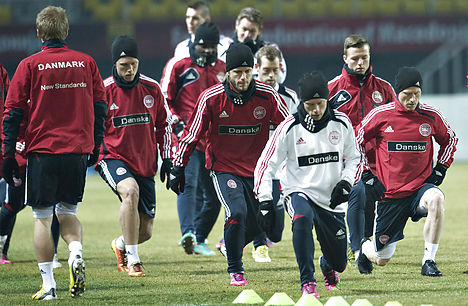 Photo: Jens Nørgaard Larsen/Scanpix
Denmark's football association revealed Saturday that a pay dispute with the players' union has been resolved, with national players accepting pay cuts in return for bonuses.
"This is a really good day for international football and for Danish football," a visibly relieved Claus Bretton Meyer, head of the Danish Football Association (DBU) said during a press conference. "It has been incredibly important to reach a common agreement for the national teams."
Denmark are set to play a friendly at home to the United States on March 25 but had lacked an agreement on pay levels for international games since a previous deal expired last year.
Negotiations broke down Sunday with both sides accusing the other of intransigence before returning to the negotiating table.
The new agreement, which runs to 2018 for the men's national team and to 2017 for the women's team and under-21s, includes a 17 percent pay cut which the DBU had been seeking.
In return, the DBU agreed to the players' union demands for new bonuses for national players if the team qualifies for finals such as Euro-2016 in France.
It will also maintain collective pay agreements which it had attempted to scrap.
"We are pleased that the men's team players are willing to lower fees and contribute towards better finances so we can afford to invest in fan-experiences, talent and all sorts of football activities," Bretton Meyer said.
"It will be good to be able to focus now on the national team and the upcoming matches,” he added.
The Danish Footballers' Association, which represents players, had fought for a "results-oriented" pay deal.
"We are pleased that we now have collective agreements in place," the association's president Thomas Lindrup said in a statement. "It has been important to us to find a long lasting solution."
Denmark are ranked first in Group I for the 2016 European championships qualifiers ahead of Portugal, Albania, Serbia and Armenia, but are the only team in the group to have already played four matches.