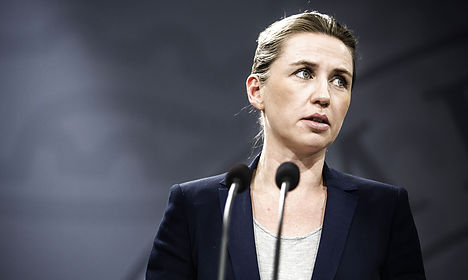 Justice Minister Mette Fredriksen. Photo: Simon Læssøe/Scanpix
Justice Minister Mette Frederiksen announced late on Thursday that she will ask officials including the Danish Prison and Probation Service (Kriminalforsorgen) and the the nation’s public prosecutor office (Rigsadvokaten) to take eleven specific initiatives designed to combat radicalization and tighten parole procedures.
Frederiksen’s plan is the result of a preliminary investigation into public authorities’ interactions with Omar El-Hussein, the Dane of Palestinian origin who killed two and injured six in the February 14-15 shootings in Copenhagen before being shot and killed by police.
El-Hussein is believed to have been radicalized while in jail and was released just two weeks before carrying out his attacks. Thus, much of the minister’s plan focuses on combating radicalization behind bars and the need for tougher parole conditions.
“What we have today is not a final evaluation. But we can already see that there are areas in which the authorities could do better. We have a shared responsibility as authorities, practitioners and politicians,” Frederiksen said in a press release.
Among the initiatives is an examination of whether parole should be used more sparingly and requirements that prison officials follow up more closely with criminals after they’ve been released. Frederiksen has given the Prison and Probation Service until August 1st to submit a new parole strategy.
The justice minister is also asking the public prosecutor to reconsider using community service as a crime sentence.
“Community service should only be used when it makes sense and it doesn’t make sense when we are talking about hardened criminals,” a handout from the Justice Ministry reads.
The ministry’s plan also calls for the Prison and Probation Service to be much better at identifying and prohibiting radicalization in the nation’s jails and prisons and for clearer lines of communication between prison officials and the Danish Security and Intelligence Service (PET).
In the immediate aftermath of the February attacks, it was revealed that PET was warned that El-Hussein was “at risk of radicalization” but did not follow up as it had “no reason to believe” that the 22-year-old was planning an attack.
Under the new proposal, prison officials and PET will be asked to coordinate more closely and follow up on prisoners who have been identified as potential radicals.