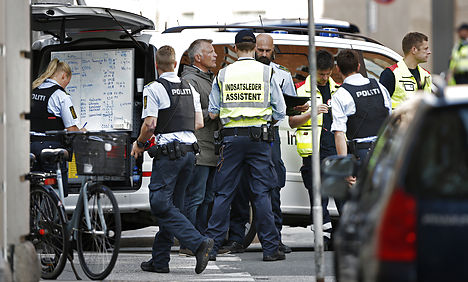 The 67-year-old killed one and injured another in a courtroom shooting. Photo: Jens Astrup/Scanpix
The 67-year-old man who opened fire in a Copenhagen courtroom in September, killing a lawyer and seriously wounding his daughter's former husband, was sentenced to life behind bars on Thursday.
In a unanimous decision, the Frederiksberg Court ruled that because the man’s actions were premeditated and incredibly reckless he deserved a life sentence on one charge of murder and one charge of attempted murder.
The man, whose name is being withheld from the press, shot and killed 57-year-old lawyer Anders Lindholt and seriously injured his own former son-in-law, aged 31, when he shot both men inside Fogedretten, a Copenhagen courthouse that handles cases involving the enforcement of visitation rights, debt payments, and foreclosures.
The 67-year-old immediately admitted to the shooting after being apprehended by police on September 16th.
Upon arrest, the man told police that he planned to kill both men before turning the gun on himself and committing suicide. He couldn't carry out his plan when he used more bullets than planned and didn’t have any left for himself.
The man secretly recorded his attack on a hidden dictaphone in order to document it for his daughter.
According to Jyllands-Posten, the man could be heard saying on the tape: “Damn it, I should have brought more bullets.”
In court on Monday, he said he fired the shots after getting into an argument with the judge in his daughter's visitation rights case.
"I thought that there were no other options,” the man said.
The 67-year-old was representing his daughter in court when he pulled out a sawed-off rifle and fired six shots. Lindholdt was killed on the spot while the man’s former son-in-law, who also has not been named, was injured.
The man said that his actions were the result of a long and bitter dispute between his daughter and her ex-husband over visitation rights for their child.
The September shooting set off a national debate about the level of security at Danish courts. As a result, a trial programme will implement security controls at five city courts nationwide.