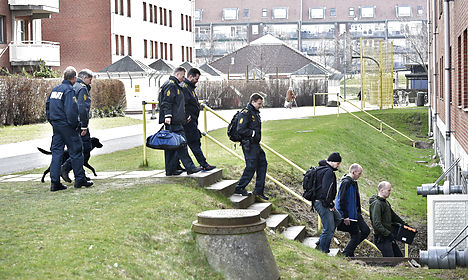 Police raided addresses on Tuesday (pictured) and Thursday. Photo: Erik Refner/Scanpix
Danish police on Thursday detained a fourth man suspected of aiding the gunman who killed two people in twin attacks in Copenhagen last month.
"Copenhagen Police have arrested a young man… suspected of complicity in the perpetrator's actions on February 14 and 15," police said in a statement.
Five addresses in Copenhagen and the surrounding area were also being searched, they said.
Armed with an assault rifle, Omar El-Hussein killed two people in the attacks at a cultural centre and a synagogue in the Danish capital.
Three other accomplices have been detained since February 16 for allegedly helping the 22-year-old gunman obtain and get rid of weapons.
The latest suspect was arrested in Copenhagen's Nordvest district, a low-income area bordering the Nørrebro neighbourhood where El-Hussein grew up and lived, tabloid Ekstra Bladet wrote.
A custody hearing will be held on Friday, police said, but declined to specify what charges he would be facing.
Police on Tuesday searched another eight Copenhagen apartments as part of an investigation into the attacks but they said those raids had "no link" to Thursday's operation.