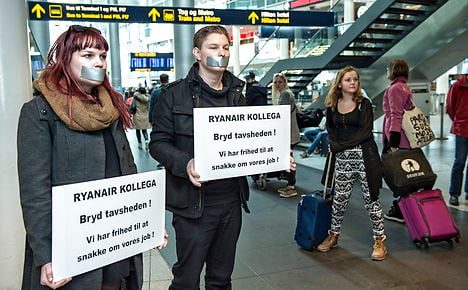 "Ryanair colleague: Break the silence. We have the freedom to talk about our jobs." Photo: Jens Nørgaard Larsen/Scanpix
A Ryanair pilot on Wednesday called Danish police as demonstrators kept the budget airline's first flight from Copenhagen grounded for three hours amid a dispute with staff unions over wages and working conditions.
"The Ryanair pilot has asked for police to be called to the scene because there was a breach of the safety rules," Copenhagen Airport spokesman Søren Hedegaard told AFP.
The demonstrators "work here at Copenhagen airport" and "they are inside the area that requires valid access permission to enter", he added.
Between 50 and 60 demonstrators could be seen standing around the aircraft by one of the airport's gates, preventing it from refuelling.
However, in a country where trade unions are powerful and enjoy public support, police seemed unwilling to disperse the demonstration.
"We have asked them to consider leaving the site and resolve the conflict in a different way. They were going to think about it," deputy police inspector James Keiwe told news agency Ritzau.
"We are very tolerant and patient at the Copenhagen police, so they must be given time for that," he added.
Some three hours later, the demonstrators left, Copenhagen Airport said.
The Danish Confederation of Trade Unions (LO), the country's largest union centre, distanced itself from the protest, citing a pending court case to determine whether the Irish airline's flights from Dublin to Copenhagen should be subject to Irish or generous Danish labour law.
It was prompted by the airline's refusal to enter into a collective bargaining agreement with a union for pilots and cabin crew.
A ruling next week could pave the way for a sympathy strike by other unions that would make it hard for the budget carrier to handle luggage and receive fuel deliveries.