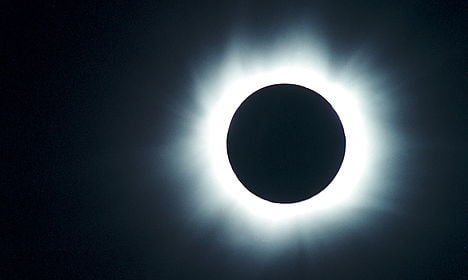 From Denmark, the eclipse will range from 80-85 percent, depending on location. Photo: Lars Møller/Scanpix
On Friday morning, the moon will cross the path of the sun, creating a partial eclipse that can be seen from Denmark. According to Berlingske, it will be the first eclipse in Denmark in 16 years and the largest since 1961.
An astronomer at Aarhus’s Steno Museum promises a “magical experience” if there are clear skies.
“In Denmark it will be so dark during the eclipse that it will be hard to see colours. The shadows will be crisp and the sky will be completely dark blue. If only we can get a fairly clear sky, we’ll be in for a magical experience,” Ole Knudsen told Berlingske.
The forecast from meteorology institute DMI however warns that the conditions will be far from ideal, with “a very big risk that the clouds will cover the whole thing”.
The extent of the eclipse – if it can be viewed through the clouds – will vary based on location within Denmark. The further north one is, the more of the eclipse one will see. In northern Jutland, there will be up to an 85 percent eclipse, while in the Copenhagen area the moon will block out about 80.5 percent of the sun’s light.
The timing also varies slightly, with the eclipse starting between 9.40-9.42am and peaking between 10.47-10.50am depending on location.
The best place to view the eclipse is in the Faroe Islands. Along with the Norwegian island of Svalbard, the Danish-owned Faroes are the only place to see a full eclipse from land.
The Faroe Islands are expecting thousands of visitors from around the world to arrive for the special cosmic event, temporarily increasing the islands’ population by up to 20 percent.
“People are completely crazy about this. Those who have experienced it before really value the opportunity to come again,” Erik Fey, a travel agency owner who has chartered a ferry to the Faroes, told Kristeligt-Dagblad.
Fey said that nearly 900 Danes have booked a ticket for his chartered tour. They will watch the eclipse from atop Hotel Fòroyar, which towers over the Faroese capital of Tórshavn, along with visitors from as far away as Australia and Japan.
“It is a fantastic spot that looks out over the city of Tórshavn, the fjord and [island-village] Nolsoy. There will be over 1,000 people standing there, and camera crews from CNN and the BBC will also be up on the hotel’s grass roof,” he said. Don't look directly at the sun. Photo: Linda Kastrup/Scanpix
Whether viewing the eclipse from the Faroe Islands or Denmark, it is important to never look directly into the sun. Most places in Denmark have reported that they have completely sold out of their stock of special eclipse shades. For those who weren’t able to secure a pair, there are numerous online guides for making homemade eclipse viewers, including this one from Space.com.
For those who can’t make it outside on Friday, a number of websites will be live streaming the eclipse, including Slooh and the Virtual Telescope Project.