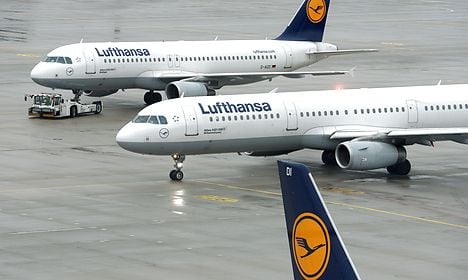 Passengers out of Denmark just can't catch a break these days. Photo: CHRISTOF STACHE/Scanpix
German airline Lufthansa cancelled more than 400 domestic and European flights scheduled to take place on Wednesday, with long haul services expected to be affected on Thursday as staff called for a second strike.
Flights between German airports and Copenhagen, Billund, Gothenburg, Stockholm, Oslo and Helsinki are among those affected by the first walkout.
Some 20 flights between Denmark and Germany are cancelled.
The German pilots' union Cockpit has called on its members to stop work between 11.01pm on Tuesday and 10.59pm on Wednesday in a long-running dispute over early retirement provisions.
"Despite the strike, the Lufthansa group will be able to operate most of its around 3,000 daily services and offer most passengers alternatives on other flights," Lufthansa said.
"Overall, the airlines of the Lufthansa group will be able to operate around two thirds of its timetabled flights."
Cockpit staged a long series of walkouts last year over management plans to change the pilots' transitional pension arrangements.
Currently, pilots can retire at 55 and receive up to 60 percent of their pay until they reach the statutory retirement age of 65. Lufthansa wants to scrap the arrangement.
Earlier this month, both SAS and Norwegian pilots went on strike in Scandinavia to protest their wages and conditions.
Norwegian — Europe's third-largest budget airline — struck a deal with pilots last week after an eleven day walkout affecting around 200,000 passengers.