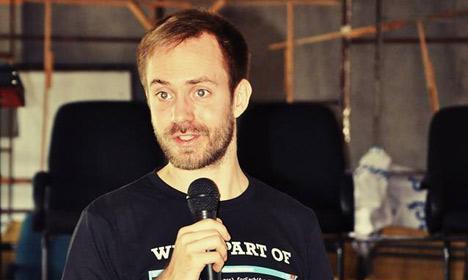 Mark Dencker is the co-founder of the Copenhagen-company Wiredelta, which provides development, design and web marketing services to start-up companies. Photo: Wiredelta

Mark Dencker is the co-founder of Wiredelta, a Copenhagen-based company that provides development, design and web marketing services to other start-ups. We spoke with Dencker about his company's rocky start and lofty ambitions.

How did you come up with this business idea?
In 2010 I decided to quit my job as an analyst at the Danish investment bank for developing countries (IFU) while studying economics in order to do an MBA in Barcelona. Shortly after arriving in Barcelona, I met my co-founder Thibaut Delarbre at the student residence where we created our first company, a Vistaprint competitor called Designing Opportunities. We did everything wrong: a poor company name, an even worse domain name, no designers or developers who were willing to get on board and no backers. Everything was an uphill battle.

This was when we realized how much the tech industry was lacking a place that enables companies to access a highly trained technical workforce, bridging the gap between cheap but unsatisfying freelance portals on the one side and pricey high-end web agencies on the other.

When we created Wiredelta in 2012, we were both business graduates with limited technical know-how. Being outsiders turned out to be a short-term problem but a long-term strength. It enabled us to see the industry from a different angle and recognize two main issues: training and tracking.

The tech industry moves super fast, and in order to keep up you need to constantly adapt to the newest technologies and track efficiency in order to deliver projects within budget. We solved these issues by building in-house training institutes and time tracking systems, which give us access to a steady flow of well-trained developers and the ability to spot where things go wrong.

What were the initial challenges? How did you overcome them?
Entrepreneurs are people who create something out of nothing, which is probably the hardest thing you can do in life. We knew from the beginning that Wiredelta would be all about the people, so the initial challenge was to spot the best out there. We did that by building the institute from scratch and tracking where the chain falls off. That requires super hard work, but spiced up with a bunch of luck and perhaps a little bit of smarts we have managed to get over the bumps on the way.

How has the journey been so far?
Starting a company is a roller coaster. Some days everything is running on high-speed rails, sometimes it’s an uphill struggle. Those are just the rules of the game working in tech trying to create something new in the world. We are committed to building the number one hub for companies around the globe to tap into a well-trained pool of developers and designers, and as a founder it’s a pleasure to see how that is getting closer to reality every single day.

How has becoming an entrepreneur changed you, personally?
What doesn’t kill you makes you stronger! Entrepreneurship has a lot of glamour to it, and there certainly are moments where you feel like a rock star, but truth of the matter is that it’s the hardest thing you can do. Its all about keeping things as simple as you can to begin with, and then build on top. Marc Andreessen talks about how every layer of innovation builds on top of the previous one, and if you don’t want to work 16 hour days use KISS (Keep It Simple Stupid) all day long. As an entrepreneur, you quickly discover that it’s the small things in life that makes a large difference, both in your professional and personal life.