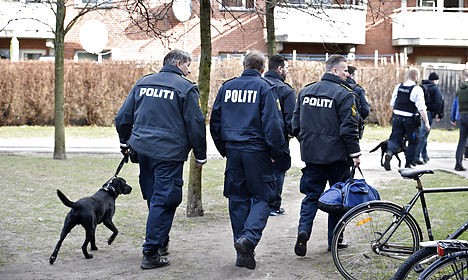 Copenhagen Police searched eight Copenhagen residences on Tuesday. Photo: Erik Refner/Scanpix
Danish police on Tuesday searched eight Copenhagen apartments as part of an ongoing investigation into the February 14-15 attacks that left two people dead.
"We are still in the process of mapping the movements of the perpetrator and the accomplices and this morning's raids should be seen in light of this," police said in a statement. "We are looking for further clues in the case."
Some of the apartments were in Mjølnerparken, the Nørrebro housing estate where 22-year-old gunman Omar El-Hussein grew up. Police also searched addresses in inner Copenhagen and the Amager district.
Three accomplices have been detained since February 16 for allegedly helping El-Hussein, a Dane of Palestinian origin who was shot dead by police in a pre-dawn shootout following the attacks.
Armed with an assault rifle, El-Hussein fired 28 bullets at a cultural centre hosting a seminar on free speech and Islam, killing a filmmaker.
He later opened fire at a synagogue, killing an unarmed Jewish security guard.