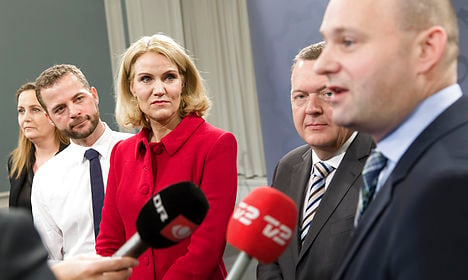 L-R: Pia Olsen Dyhr, Morten Østergaard, Helle Thorning-Schmidt, Lars Løkke Rasmussen and Søren Pape present the EU 'opt-in' plan. Photo: Jens Astrup/Scanpix
When Danes go to the polls within the next year to vote on ending Denmark’s opt-out to the EU’s justice and home affair rules, they will be asked to replace the opt-out with an ‘opt-in’ agreement that will result in Denmark joining 22 specific EU legislative acts.
As part of the opt-outs granted to Denmark in the 1992 Masstricht Treaty, the nation is exempt from implementing 50 specific pieces of EU legislation. The government coalition parties, along with opposition parties Venstre and the Conservatives and the left-wing Socialist People’s Party agreed today to ask Danes vote on adopting 22 of them.
See also: Denmark presents united front ahead of EU vote
The parties want to see the other 28 legislative acts rejected, including 18 that fall under the EU’s asylum and immigration policies, an area that the opposition parties said was a non-starter.
“If I were to put a headline on the agreement, then I’d say that the acts make it harder to be a criminal in Europe and easier and safer to be a Dane,” Prime Minister Helle Thorning-Schmidt said at a Tuesday press conference, where she was flanked by the leaders of the four other parties.
Thorning-Schmidt announced back in October that Denmark would hold a referendum on its opt-outs to the European Union’s justice and home affairs rules.
The decision was driven largely by the fact that reforms of the EU’s law enforcement agency Europol threaten to leave Denmark out in the cold unless it drops its opt-out on legal affairs.
See also: Denmark to vote on EU justice op-out
Both the PM and opposition leader Lars Løkke Rasmussen have stressed the importance of remaining a part of Europol cooperation and both have agreed to hold the referendum no later than March 31st, 2016 regardless of which of them is sitting in the prime minister’s office.
In addition to voting on continued participation in Europol, the referendum will also address Denmark’s role in the European judicial cooperation agency Eurojust and the country’s participation in a European system for registering flight passengers, among other things.
Under the parties’ agreement, a vote to end the EU opt-outs will mean a vote in favour of the new opt-in model. In addition to opting in to the 22 points, the parties want Denmark to have the option of deciding whether or not to join any new proposals from the EU Commission.
“It is a thorough agreement that provides a clear picture of what the Danes must decide. The ambition is to make it tougher to be a criminal, safer to be a Dane and easier to be a business,” Rasmussen said at Tuesday’s press conference.
Rasmussen said that his party secured the right to veto any future acceptance of European immigration and asylum policies.
“We have agreed that we will not accept certain parts [of EU legislation, ed.] and if someone should get that idea in the future, we have the right to veto. On behalf of Venstre, I can guarantee that we will not join in,” he said.
Denmark was granted four opt-outs from the 1992 Maastricht Treaty: defence; justice and home affairs; the maintaining of the kroner rather than the euro; and an opt-out on citizenship rules that was cancelled out by the Amsterdam Treaty that took effect in 1999.
Denmark last held a referendum on its relationship to the EU in 2000, when voters once again rejected the euro.
Opinion polls have shown that a majority of Danes are in favour of ending the opt-outs.
In announcing Tuesday's plan, the parties did not commit to a specific date for the referendum but held to the promise of holding it before the end of March 2016.