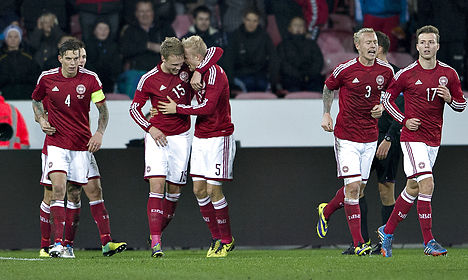 The players want "a results-oriented" solution to the pay dispute. Photo: Henning Bagger/Scanpix
Denmark's national football team is set to play a friendly match against the United States in Aarhus on March 25 but lacks an agreement on pay levels for international games since a previous deal expired last year.
Negotiations between the two sides broke down Sunday.
The Danish Football Association (DBU) was downbeat about the prospects of a compromise, saying it had proposed a 17 percent cut while the Danish Footballers' Association was seeking a pay hike of a similar size.
"It's a very strange situation. We have always been open about DBU's financial problems and suddenly we are met with a demand from the Footballers' Association for more money for national teams. It is completely unrealistic," the association's spokesman Jakob Høyer said in a statement.
The Danish Footballers' Association, which represents players, accused DBU of misrepresenting its demands and said it was prepared to accept pay cuts on the condition that players receive bonuses if the team qualifies for finals such as the Euro-2016 in France.
"We think it is fair with a results-oriented solution that is linked to sporting results… which provides millions in cash to DBU and is passed on to Danish football," the player's union said in a statement.
The negotiations were expected to resume later in the week and the football association said it was considering an interim solution for the friendly against the US, such as offering players the same terms as 2014.
"Then it's up to the players if they want to play," said Høyer.
Denmark are ranked first in Group I for the 2016 European championships qualifiers ahead of Portugal, Albania, Serbia and Armenia but are the only team in the group to have already played four matches.