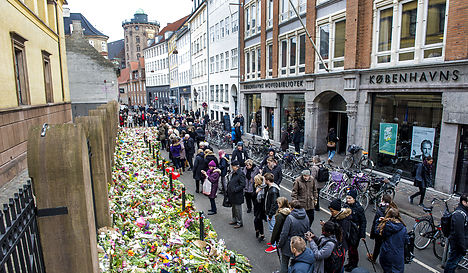 The social minister said that last month's shooting and the growing number of foreign fighters from Denmark have been "a wake-up call". Photo: Søren Bidstrup/Scanpix
Well over a third of Denmark's 98 municipalities have no strategy for combating radicalization. Of the 69 municipalities who responded to an inquiry from Jyllands-Posten newspaper, 39 of them said that they have no current anti-radicalization strategy and many of them said that they don't even have anyone on staff who is equipped to deal with radical extremism.
Many of the municipalities are now working to change that and have kick-started anti-radicalization plans after last month’s shootings in Copenhagen.
According to Jyllands-Posten, among the municipalities working on new strategies are Brøndby, Furesø, Hedensted, Hillerød, Næstved, Syddjurs, Vallensbæk and Vejle.
The latter is looking for inspiration in Aarhus, where a ‘jihadist rehab’ programme has gained international attention and where school officials plan to expand their anti-radicalization efforts to include children as young as nine years old.
“We have decided to implement some general initiatives that focus on civil society and the network around young people. We have been in contact with Aarhus in order to get inspiration for efforts targeted at parents and we want to implement closer relationships with the minority communities,” Vejle Municipality’s integration coordinator, Ulla Varneskov, told Jyllands-Posten.
Even before Omar El-Hussein, a Dane of Palestinian origin who police say may have been radicalized behind bars, killed two men in the terror attack of February 14-15, Denmark had been struggling with growing extremism.
The country is second only to Belgium in the number of foreign fighters that have gone to fight in Syria or Iraq. At least 110 Danes have left the country to wage jihad, and around 50 of them are now thought to be back in Denmark.
The social minister, Manu Sareen, told Jyllands-Posten that due to the growing number of foreign fighters and the Copenhagen attack, “the past year to year and a half has been a wake-up call to everyone in this country”.