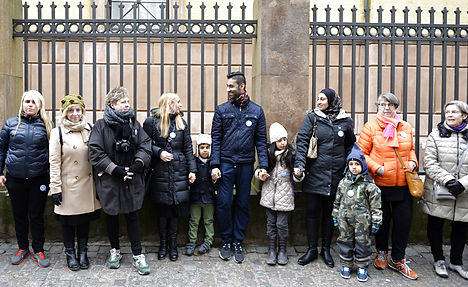 Photo: Simon Skipper/Scanpix
The synagogue on Krystalgade in the heart of Copenhagen was encircled by some 1,000 people standing hand in hand in a call for peace following the February twin shootings that rocked the nation.
The peace ring was the initiative of Niddal El-Jabri, a Copenhagen Muslim who wanted to send a signal that Jews should feel safe and welcome in the city.
SEE PHOTOS HERE
El-Jabri told broadcaster DR that he was pleased with the turnout.
“We want to send a clear signal that we want a peaceful society in Denmark,” he said.
Among those who attended the ceremony was Sergeot Uzan, the father of the 37-year-old Dan Uzan, the second of two victims shot and killed by Omar El-Hussein, who was later killed in a confrontation with police.
“There is hope for humanity and democracy,” Uzan told DR.
Other prominent attendees were Denmark’s chief rabbi, Bent Melchior, Economy Minister Morten Østergaard, Minister for Higher Education Sofie Carsten-Nielsen and poet Yahya Hassan.
See more photos of the peace ring here.