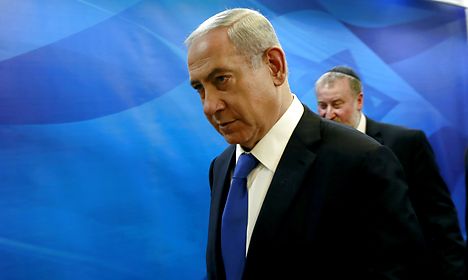 Netanyahu is seeking a fourth term. Photo: Gali Tibbon/Scanpix
In an interview with an Israeli radio station, Israeli PM Benjamin Netanyahu said he believed that Nordic politicians did not want him to remain in office.
"Scandinavian governments have spent millions of dollars on a campaign to remove me from power," he said on the station Kol Israel.
"Western governments, but mostly Scandinavian…They know perfectly well why they prefer Buji and Livni to me," he added, referring to his opponents.
As head of the right-wing Likud party, Netanyahu faces a tough challenge from the centre and left in Israel's March 17th elections.
In a separate interview with Rega Radio he was reported to have said that "foreign governments, specifically Scandinavians, are part of a worldwide campaign to topple me", according to a translation posted on Twitter by Israeli blogger and journalist Tal Schneider.
Sweden in particular has had strained relations with Israel in recent months after becoming the first western European country to formally recognize the state of Palestine.
The decision led to Israel temporarily recalling its ambassador from Stockholm and claims that Sweden's Foreign Minister Margot Wallström had been snubbed by Israeli government officials, after she cancelled a planned visit to Jerusalem.
But Netanyahu's comments about Scandinavian governments have been met with strong criticism from some social media users in Israel.
"What the hell has Scandinavia done to Benjamin Netanyahu?", wrote Jerusalem-based journalist Noga Tarnopolsky.
Israeli historian and writer Gershom Gorenberg posted: "last refuge of the fading strongman: accuse outside agitators, foreign governments”.
Israel's election takes place on March 17th and the vote will decide if Netanyahu gets a fourth term in office.