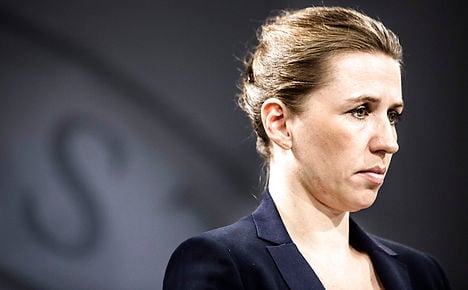 Mette Frederiksen said she would continue to pursue "Danish asylum policies", not European ones. Photo: Simon Læssøe/Scanpix
Following the UN’s call for “more solidarity” between European nations and a “more equitable distribution of refugees”, Justice Minister Mette Frederiksen said on Thursday that Denmark would set its own rules for accepting refugees.
“We want to carry out Danish asylum policies. In this area, we don’t wish to choose the European way,” Frederiksen said from Brussels, according to news agency Ritzau.
Frederiksen was in the Belgian capital to meet with her European counterparts. The meeting came on the same day that a UNHCR spokesman told The Local that Europe needs to adopt an agreement that would allow Syrian refugees to legally cross European borders.
See also: 'Relocate Syrian refugees within Europe': UN
With no sign of an end to the Syrian conflict, the UNHCR's William Spindler said it’s urgent that European countries find a way to share the refugee burden more equally.
“The attitude now is to shift the problem to somewhere else. We can’t continue doing this; we have to show more solidarity within Europe, and between Europe and other countries receiving most refugees,” he said.
Under the EU’s Dublin Regulation, Denmark can send asylum seekers back to other EU countries if they registered with authorities there first.
Although Denmark’s EU opt-out on justice affairs exempts the country from the Dublin Regulation, Denmark made an additional agreement with the EU to honour the regulation, which states that the member state that stores finger prints on an asylum claim is the country responsible for processing the application.
With most refugees entering Europe from the south, countries like Italy and Greece struggle to keep up and refugees often end up housed in criticizable conditions.
But Frederiksen said that refugees should remain the responsibility of the countries that first handled them.
“Even though there are tough conditions, we need to stand firm on the fact that the country where one first enters is the country where they seek asylum,” the Danish justice minister said.