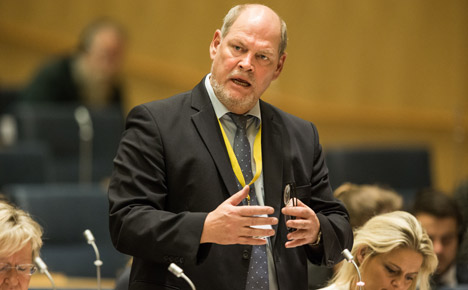 Carsten Hansen. Photo: Magnus Fröderberg/norden.org
At a meeting in Greenland, the Nordic Council of Ministers (NCM) decided to shut down its Russia-based information offices “indefinitely”.
In addition to the St. Petersburg and Kaliningrad offices, the decision will also affect contact centres in centres in Murmansk, Petrozavodsk and Arkhangelsk.
The shuttering of the offices comes after the Russian Ministry of Justice in January included the NCM on a list of NGOs it considers to be “foreign agents”.
“Continuing operations under the status of a foreign agent is unacceptable to the Nordic governments,” Carsten Hansen, who is both Denmark’s minister for Nordic co-operation and functioning chairman of the NCM, said in a press release.
“The office cannot operate in the current conditions. The purpose of the Council of Ministers’ presence in Northwest Russia to create closer links and better networks between the Nordic countries and Northwest Russia is impossible to achieve as a foreign agent,” Hansen added.
The NCM said Russia’s ‘foreign agent’ designation threatens to jeopardize decades of co-operation.
“During the 20 years we have had an office in St Petersburg, our partnership with both the local and central authorities has been open and close. Our operations there have, in all respects, been consistent with our agreement with the Russian Federation and Russian law,” NCM Secretary General Dagfinn Høybråten said.
Russian law states that foreign-funded NGOs engaged in “political activities” must register as foreign agents. NCM has had NGO status in Russia since it established its St. Petersburg office in 1995.
The NCM stressed that despite the closure of its offices “Russia remains an important partner for the Council of Ministers” but added that “ it remains to be seen how the partnership will evolve in the near future”.
The closure of the NCM offices comes in the wake of the Russian Embassy in Sweden blaming “the West, not least Sweden” for provoking the Ukraine crisis by offering Ukraine a pathway to membership of the European Union.
In large part due to recent aggressive moves by Russia, Denmark and Sweden also recently announced that they would step up military co-operation between the two nations. Sweden has also recently entered into a similar agreement with fellow NCM member Finland.