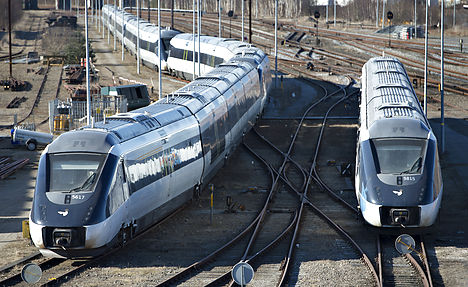 More trains and fewer delays are the highlights of the new deal. Photo: Henning Bagger/Scanpix
Under a new ten-year agreement between the government and DSB, the rail provider will need to up its total train coverage by ten percent and increase overall seating by 25 percent by 2024.
The deal calls for more regional and long-distance departures and will see the addition of one high-speed train per hour in each direction between Copenhagen and Aarhus.
DSB will also be held to greater account for keeping trains on schedule. Today, a DSB train can be up to six minutes late before being counted as a delay in official statistics. That timeframe will be halved to three minutes under the new terms, increasing commuters' likelihood of being compensated for delays.
“Commuters want three things: more train departures, more available seats and fewer delays. We want people to take public transport – all that is missing is that we can deliver it,” Transport Minister Magnus Heunicke said in a press release.
In addition to narrowing the window for when a train is considered late, DSB will also now be asked to hit a 95.6 percent punctuality benchmark for regional trains, up from 93.6 percent, while S-trains in the Copenhagen area need to be on time 97.5 percent of the time.
The agreement also requires DSB to begin the process of acquiring new electrical trains to be ready to hit the tracks once Denmark has electrified its national rail network.
The centre-left government’s deal with DSB was brokered with left-wing parties the Red-Green Alliance (Enhedslisten) and the Socialist People’s Party. No opposition party supported the deal, leading to speculation that the entire agreement could be scrapped or heavily ratified if the opposition parties take power later this year as opinion polls suggest.