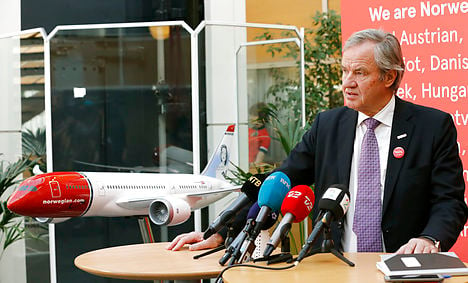 Norwegian CEO Bjørn Kjos announced the strike's end Tuesday evening in Oslo. Photo: Terje Pedersen/Scanpix
The pilots' strike at budget Scandinavian airline Norwegian ended Tuesday after affecting over 150,000 passengers with virtually all flights in Scandinavia cancelled since March 4th. The airline is the second largest in Scandinavia and domestic flights within Denmark as well as connections between Copenhagen and other Scandinavian destinations have been heavily affected.
The end of the strike was welcomed by the company’s CEO Bjørn Kjos at a press conference at the company’s Oslo head office early on Tuesday evening. He claimed that the company had made great efforts to bring the dispute to an end.
“I am very relieved that the pilots’ strike has now been called off and that our passengers can finally feel confident that flights will soon be running normally,” he said.
Kjos told the press conference that Norwegian's flights would return to normal on Wednesday, but an airline spokesman told public broadcaster DR that flights would still be affected for "some time".
"We already have some cancellations [Wednesday]. It will take some time until we are back to normal operations. We have planes and crew positions in the wrong places, but we are doing everything we can to fly again," Norwegian spokesman Daniel Kirchoff said.
Halvor Vatnar, leader of the Norwegian Pilots' Union, said the company had come some way to giving the unions the collective bargaining agreement they wanted, giving all pilots in Scandinavia the same links to the parent company, equal agreements, and common career opportunities.
"We have achieved a clear linkage to the parent company Norwegian Air Shuttle in terms of legal and financial guarantees, regardless of which subsidiary pilots are employed by," Vatnar said, according to Norwegian news agency NTB.
In exchange, pilots have accepted less expensive insurance and more flexible working hours, among other measures.
Bjørn Kjos also professed himself happy with the terms of the deal:
“We have given job security for three years. We have a lot of new planes on the way, and they need the pilots we have. We couldn’t provide a collective agreement with the parent company, and therefore sought a solution that worked for everyone.”
“I am extremely sorry for the problems caused to our passengers,” he added.
Hans-Erik Skjæggerud, leader of Parat union, said he was pleased the strike was over but was sorry so many passengers had been inconvenienced.
"We've been successful on the core areas, but I'm sorry that passengers have had to suffer for fundamental labour rights to be put in place," he said.
The strike started with 70 Norway-based pilots on Saturday, February 28th and escalated to include 650 more pilots – including around 100 from Denmark – on Wednesday, March 4th.